Is this an idle threat?

Y'know, before the shelling of Yŏnpyŏng-do Island by North Korean forces, I would have taken with a grain of salt any threats by Pyongyang to fire on South Korean activists releasing balloons with messages and dollar bills attached to them that are intended to waft over the DPRK and into the hands of some peasant.


A massive propaganda campaign by the South Korean military drew an ominous warning from North Korea on Sunday, with Pyongyang saying that it would fire across the border at anyone sending helium balloons carrying anti-North Korean messages into the country.

A statement carried by the North’s official news agency said the balloon-and-leaflet campaign “by the puppet military in the frontline area is a treacherous deed and a wanton challenge” to peace on the Korean Peninsula. The statement, attributed to a North Korean military official, said further balloon sorties would be seen as offensive provocations that would result in “direct fire” by North Korean Army units.

But that was before the shelling of Yŏnpyŏng-do. Now I'm not so sure such warnings are as glib as we once thought, nor should we be as blasé as we once were.

Still, since then ROK President Lee Myungbak made it absolutely crystal clear that South Korean forces would get really mad the next time North Korea attacked South Korean soil, and there would be repercussions. 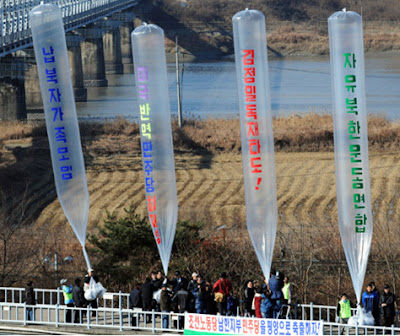 Would South Korea let North Korea have it if, say, North Korean artillery shelled Imjin-gak, the touristy area near the DMZ near which some of the balloons were released? One would hope that this time they really mean it, but Pyongyang could easily (mis)calculate that they don't. After all, South Korea going too far in any response risks a much wider war, a war that would likely spell the end of North Korea but only after considerable loss of life among South Koreans.

Yŏnpyŏng-do was a game-changer. All bets are off. My money is still on North Korea calculatedly pushing things just shy of an attack requiring a full-blown response, but who knows?

The Marmot's Hole has more on this threat, especially at a time of military exercises conducted by the US and ROK militaries.