I wouldn't buy the iPhone4 for Verizon, but that's just me.

Let me start off by saying I am not a shill for AT&T, even though they've been my (mostly) reliable service provider since I first owned a cell phone in the US (November 2006). And I have nothing against Verizon, well, except for them ripping off my septuagenarian auntie to the tune of nearly a thousand dollars by jerking her around from plan to plan, telling her she would be getting the cheapest plan for her needs when they were actually spinning her into excessive 45¢/minute calls, and then using predatory practices on her by browbeating the poor woman into a cell phone she didn't want or need and thus locking her into another two-year contract, while also neglecting to tell her, until a month later when it would be too late, that there would be a $150 service deactivation charge for ending service on her the phone formerly used by her octogenarian husband, a World War II veteran who is now in a nursing home she can't really afford.

But other than that, I have nothing against Verizon. This is all about the iPhone4, recently released in a Verizon-ready edition.

For starters, it has the same antenna issue as the iPhone4 for AT&T: if you hold it in just the right way, so that your fingers and palm bridge all the little gaps in the three-piece antenna that rings the device, your signal deteriorates, sometimes to the point of dropping calls. Like the AT&T version, it can be fixed with a bumper. And frankly, the bumper can be an enhancement, preventing the device from slipping and guarding the body from coming into contact with something hard during a drop, all in colorful style.


The antenna issue is serious enough that Consumer Reports says that's reason enough to not recommend the Verizon version, just as it did with the AT&T version:


The Verizon iPhone 4 has a problem that could cause the phone to drop calls, or be unable to place calls, in weak signal conditions, Consumer Reports engineers have found in lab tests.

The problem is similar to the one we confirmed in July with the AT&T version of Apple's newest smart phone. It can occur when you hold either version of the phone in a specific but quite natural way in which a gap in the phone's external casing is covered. The phone performs superbly in most other respects, and using the iPhone 4 with a case can alleviate the problem.

But that's no reason to buy the AT&T version over the Verizon version. The real problem is something else: Verizon's network is such that some of the most important multitasking features are lost when talking on the Verizon-based iPhone4, something that does not happen when using the AT&T-based iPhone4.

Using a Verizon iPhone4 at the Royal Hawaiian Apple Store in Waikiki, allow me to demonstrate. 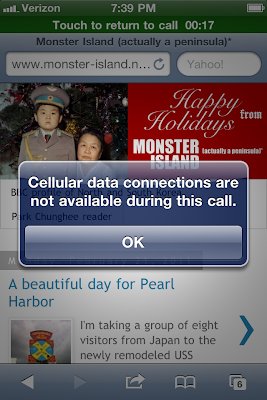 This is a screen grab of me trying to browse the Internet while talking on the phone (I called myself from the demonstration phone inside the Apple Store). It simply states that I cannot use Safari while I'm talking on the Verizon iPhone4. As soon as I hung up, I could go back to browsing.

Now some of you might say, "What's the big deal? I don't need to browse while talking." Well, I do enjoy being able to look stuff up while on the phone. Sometimes the conversations I'm having, like with the aforementioned auntie, require me to look things up while I'm talking.

This extends to other Internet-based services as well, such as Google Maps, demonstrated below: 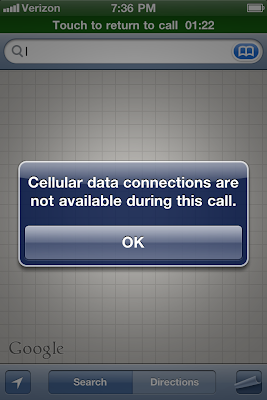 Please bear in mind, this is not an obscure test of some rarely used functionality: the fact is that I frequently go to the iPhone4's map function (which is Google Maps) while on the phone. You might be trying to locate someone, or help them locate you, etc., or figure out where you're going.

Similarly, I also check out the apps for Yelp, Wikipedia, and even the Apple Store (which I used to make Genius Bar appointments) while using the phone. With AT&T, this is absolutely no problem; with Verizon, it is absolutely impossible.

Now, there are other reasons to consider Verizon over AT&T. Supposedly some people get better service with Verizon, although I have had little complaint about my AT&T service. In Hawaii, it's great. In California and Nevada, it is as good as my auntie's Verizon service. The only time I had a problem was on the North Rim of the Grand Canyon, where I had to literally sit on the edge of the canyon with my hand extended over the abyss in order to pick up the faint signal coming from the South Rim's Grand Canyon Village, ten miles away, but that's apparently a problem for everyone. However, if AT&T's service is not a problem in your area, go with the AT&T phone. Otherwise you're missing out on what I consider one of the key features of this very smart smartphone.

Some say that AT&T's service, relative to Verizon's, will improve as more and more iPhone4 users shift to Verizon or Verizon picks up new customers who had waited for the iPhone4 to come to Verizon: much of AT&T's slowdown (wish I could find the link for this) came from having so many intensive iPhone users, a problem Verizon may now face.

And with a new iPhone5 (or at least an iPhone 4s) expected in the pipeline sometime around July, why not just wait a little more? Maybe the Verizon model of the next-generation iPhone will have resolved these issues.