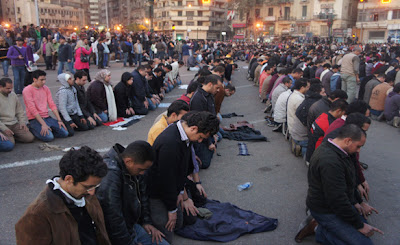 First Tunisia, now Egypt, perhaps Yemen in the near future, and then who knows. It looks like the Middle East is partying like it's 1989.

Over at One Free Korea, the question has been asked whether what's happening in Egypt could happen in North Korea. Emphatically, the answer is no, at least right now (an opinion Joshua Stanton and I share). The people of North Korea are too partitioned, there are too few electronic resources with which to communicate (despite the growing popularity of cell phone service at least within the cities), and for now the people are too scared. Yes, the Great Currency Obliteration of 2009 has made for a lot of disgruntled people, but things things aren't ready to blow... at least not yet (I think something like this would have to wait until warmer weather anyway, when there would be far more people milling about).

One also has to take into consideration that the North Korean people are probably hearing very little about Egypt anyway. And it's not just the North Koreans: Beijing is also trying hard to censor what North Korea's neighbors in China are also reading.


Chinese authorities have blocked the word "Egypt" from searches on Twitter-like microblogging sites in an indication of concern among Communist Party leaders that the unrest there could encourage similar calls for political reform in China.

Internet censors also appeared Sunday to have deleted almost all of the comments posted beneath the few limited reports on the unrest—mostly from the state-run Xinhua news agency—that have been published on Chinese news sites in the past few days.

The strict online controls illustrate the party's concern that the Internet is providing China's citizens with a new means of information and organization that could challenge its monopoly on power, as has happened with other authoritarian governments in recent years.

Chinese authorities also stepped up their efforts to control the Internet after the "color revolutions" in the former Soviet Union in 2003-05, and the pro-democracy protests in Iran in 2009. They completely shut down Internet access in the northwestern Chinese region of Xinjiang for several months after riots there in 2009.

We certainly wouldn't want to see Tiananmen 2, now would we? So why give the Chinese people any ideas about group protest, toppling a government that's been entrenched for decades and has no direct accountability to the people? 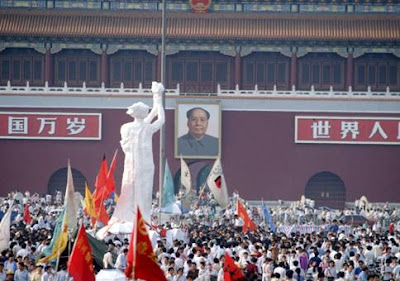 And if China is able to control the flow of information, don't expect the North Koreans to hear much about it either.