Over at ROK Drop, GI Korea highlights news of a North Korean general who was demoted after a series of defections (in which DPRK soldiers were killed). Now, a demotion in such a case would hardly be newsworthy, except that in North Korea it is unusual for a person to be demoted over an embarrassing incident and still be in uniform.

To put it bluntly, "demotion" usually means field work. As in, they take you out to a field and work you over and then put a bullet in your brain (and then ship your family off to a work camp).

As I noted at ROK Drop, I wonder if this could be another possible sign of a kinder, gentler Pyongyang regime. And if so, what does that mean?

Previously, even minor errors of judgement or just bad luck could result in imprisonment and/or death, but how would things change if there were considerably more leeway? Perhaps it might lead to the military feeling they have freer rein to ignore orders from up above, and that could lead to all kinds of interesting situations.

What's interesting is how the Chosun Ilbo discovered General Hyon Yongchol had been demoted. The regime has lately been C-SPANning the country, and now we can peruse all kinds of video and note changes, cracks, and shifts. The CSI found a difference in the decorations on the General's uniform. 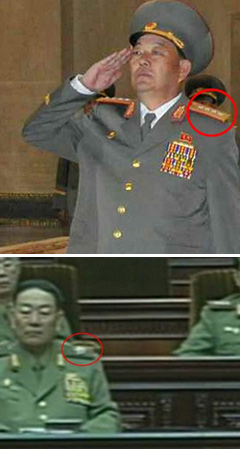 Over at ROK Drop, this led to an entire discussion about the oversized uniforms common to North Korea's military brass (not to mention hats that look like they're designed to hide contraband).


Somebody needs to show these guys how to choose uniform sizes that ACTUALLY FIT THEM.

The Korean equivalent of the above saying is "옷이 날개다" (oshi nalgaeda), literally, "Clothes are wings."

And by the looks of them, these guys would take off like the flying nun if they ever encountered a gust of wind. I guess that's why they wear all those medals.