NPR on deaths in Vietnam of two native English teachers from Korea: Were they poisoned? 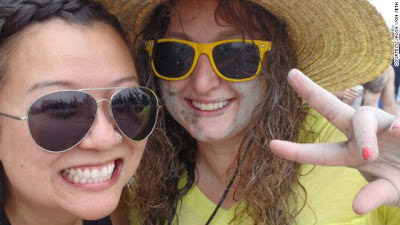 Last summer, two native English teachers in South Korea, one of them a Canadian from Ontario and the other an American from Wisconsin, took time off from their jobs in Kyŏnggi-do Province for a vacation in Vietnam. Tragically, both women would end up dead while visiting Nha Trang, with poisoning suspected.

News of the sudden deaths of two of their own spread through the English-teaching community. Meanwhile, Senator Al Franken from Minnesota, where one of the women had gone to college (at my grandmother's alma mater), called on the US State Department to look into the deaths.

Though it happened in late July, I'm writing about it because NPR this week discussed the case as part of a larger story on tourist deaths in Southeast Asia:


In late July, two women in their mid-20s were backpacking through Vietnam. Kari Bowerman, a 27-year-old American from Wisconsin, and Cathy Huynh, a 26-year-old Canadian, were on vacation from their jobs as English teachers in South Korea.

The companions arrived in Vietnam one day, and the next day they were in the hospital, Blum says. "They were, both of them, suffering from symptoms of what looked like acute poising."

Huynh was discharged from the hospital, but returned later that night to visit Bowerman — only to find out she had died. Huynh herself died in the hospital two days later.

A pesticide called chlorpyrifos is being blamed for the women's deaths. Though commonly used to treat bedbug infestations in Asian countries, it's banned for use in residential buildings in the United States because of its link to developmental problems in children.

[Science writer Deborah] Blum says the theory that Bowerman and Huynh died from careless fumigation at their hotel doesn't add up.

"If you're doing widespread fumigation, it's not like you're just doing one room," she says. Why didn't hotel workers or other guests die?

The deaths of Ms Bowerman and Ms Huynh are not the primary focus of the NPR piece, but are depicted as possibly being part of a bigger picture involving murder. It highlights the "gruesome" deaths of sisters Noemi and Audrey Belanger during their visit to Thailand and from there suggests that rather than accidents, someone is deliberately killing Western travelers in the region, perhaps a dozen of them over the past few years. The aforementioned Deborah Blum wrote about it in Wired:


Two of these deaths occurred in June in Thailand, two in June in Vietnam. All four women were diagnosed with the symptoms of acute poisoning. And while some explanations have been offered by the authorities, these have been either vague, improbable (see my recent post on the deaths in Thailand) or opaque (see CNN’s Friday story on the deaths in Vietnam). My favorite statement is one from the Thai police declaring that it could be “months before official results are revealed if ever.” (Emphasis mine).

If ever? What kind of a police response is that? Does it mean that investigators know something they don’t want to tell? Or that they don’t have a clue? It’s no wonder that the rumor mills are spinning stories of murder, of a serial killer stalking female tourists in Southeast Asia, of a police cover-up to protect the valued tourist industry. The serial killer idea, of course, builds on earlier mysteries: the 2009 death of a Seattle woman, still unsolved today. The similar and also unexplained death of a 22-year-old woman from Norway the same year. An odd cluster of deaths in another Thai city during winter of last year, including a 23-year-old woman from New Zealand.

The other theory circulating is that the police are covering up the careless use of insecticides by Asian hotels; an explanation denied, of course, by the hotel industry. It doesn’t explain, of course, why most of these deaths involve females in their 20s. But there’s some support for it from an independent investigation into the 2011 death of New Zealander Sarah Carter.

And those particular cases are not that of the two teachers from South Korea, which are addressed later in the Wired article:


The possibility of chlorpyrifos or some other insecticide poisoning has also been raised in this summer’s deaths of American Karin Bowerman, 27, of Lake Geneva, Wisconsin, and Canadian Cathy Huynh, 26, of Hamilton, Ontario. The two friends – both working as English language teachers in South Korea – were backpacking in Vietnam, when they were admitted to a hospital in the beach town of Nha Trang in late July, suffering from vomiting, dehydration and difficulty breathing. Bowerman died that day; Huynh two days later.

But so far no information seems to be available about how they might have been exposed to that or any poison. “No police report. No hospital report. No nothing,” Bowerman’s sister, Jennifer Jacques told CNN in a fury of frustration. The lack of information has led friends of Bowerman’s from Winona State University in Minnesota, where she graduated, to launch a letter writing campaign to U.S. officials, begging for help.

I hate to sound alarmist, but if Ms Blum's suspicions of young Western women being targets have any validity, many expats in South Korea may wish to reconsider their vacation plans to Southeast Asia.