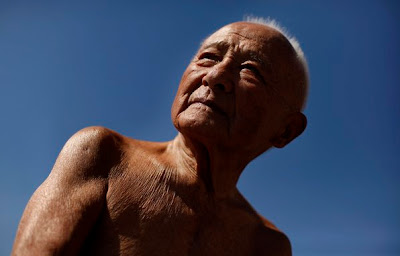 In 1948, the war against Japan was still fresh in people's minds. In 1952, the Korean War was raging. But it was during the 1948 Olympics in London and then the 1952 Olympics in Helsinki that Sammy Lee, a Korean-American born in Fresno, California, to immigrants running a "chop suey restaurant," won the US some gold medals for diving.

Mr Lee was the first Asian-American to win a gold medal for the United States, and the Korean community is so proud of him that there is a plaza named for him in Los Angeles's Koreatown.

Mr Lee, now 92 years old, is in the news today because the nonagenarian had been missing for a while.  He left his Huntington Beach home in the morning and ended up some thirty miles away in Pico Rivera, after side bars in Studio City, almost fifty miles away from his Orange County home.

Police don't give many details, but this sounds a lot like my own uncle after his Alzheimer's Disease started to take over. On the other hand, he may have just wanted to get out of the house, not realizing it would make the news.