They visit Yasukuni because of the war criminals

Blogging about South Korea and Northeast Asia can be repetitive sometimes. North Korea's annual saber-rattling and Japanese right-wingers' visits to Yasukuni Shrine are two such cyclical events that would allow me to cut-and-paste articles from years past and present them as brand-new posts (as I did with the artwork below, originally from this post).

So bear with me as I try to strike out on new ground on the Yasukuni Shrine issue, as it erupts afresh with the outrageous views of current Japanese prime minister Shinzō Abe, and I point out something that is obvious to anybody who has looked into this issue carefully, but which might be lost upon the general public who only hears about this topic once a year in passing... 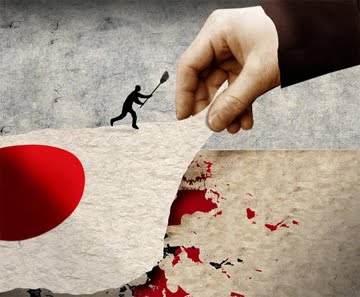 You see, in their narrative, the Pacific War was just and those war criminals are not truly war criminals, since their trials and convictions were illegitimate actions of cruel Allied victors who used inhumane actions to force an inhumane surrender (and stripping Japan of its legitimate territories like Korea). They were enshrined — in secret — to underscore that very point, which runs counter to the peace-loving narrative adopted by the Imperial Family after the war (this is why the Emperor no longer visits Yasukuni Shrine). It was a political move that usurped the religious shrine — note that one of the Yasukuni-14 was enshrined even though he did not die in war; he was enshrined because he was a convicted war criminal. Those who did enshrined the Yasukuni-14 destroyed it as a symbol of peace in order to make it a focal point of their political narrative.

And theirs (the right-wingers') is emphatically not a view shared by all Japanese, maybe not even most Japanese. The opposing Hiroshima view (though it is sometimes harnessed by the right wing because it feeds into their view of Japan as a victim of the Allies) decries the militarists's expansionism and atrocities, as well as the destruction it brought to Japanese citizens at home and abroad.

There are few ways to resolve this issue, and every year that goes by that it doesn't get resolved is a year where economic opportunity and political good will are eroded, while simultaneously nudging the region toward greater military tension.

In my opinion, the best way to resolve it is for Japan to establish a national shrine or memorial to war dead that bypasses Yasukuni Shrine and the concomitant controversy since the 1970s. Then Yasukuni Shrine will be left for individuals to pay respects to their individual family members who are enshrined there (whose numbers go far beyond the right-wingers) and for right wingers who want to make a point about their ahistorical beliefs in Imperial Japan's squeaky clean record in the half century ending in 1945.