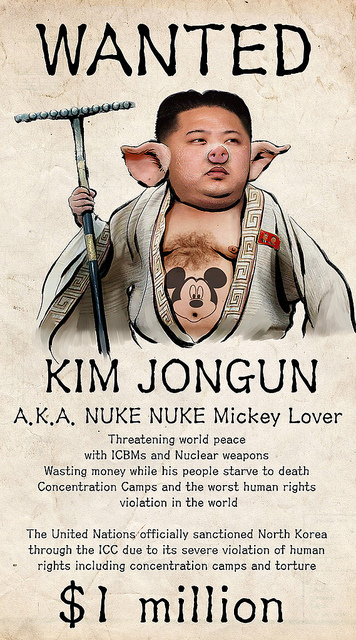 Supposedly, the "hacktivist" folks at Anonymous decided they need to do a hack job on a whackjob, so they took over the official social media accounts run by Pyongyang and posted something a tad embarrassing, like the artwork above.

North Korea’s Twitter account, which normally posts articles and bellicose rhetoric from the regime in Pyongyang, included tweets reading “hacked” or “Tango down.”

The government’s Flickr account included a picture of leader Kim Jong Un with a snout and pig ears and a Mickey Mouse image on his torso. The post included text reading "threatening world peace with ICBMs and Nuclear weapons/wasting money while his people starve to death."

The suspected postings from the hackers included the statement “We are Anonymous.” Anonymous is the name of a hacking group. A statement allegedly from the hackers reportedly said they had acquired member information from some 15,000 accounts on the government’s Uriminzokkiri.com and other websites.

At right is another image that the group claiming to be Anonymous claims to have posted on North Korea's Flickr account. (The Washington Post tries to debunk these claims.)

While this is somewhat amusing, I'm more interested in the 15,000 accounts that they claim to have broken into. While I normally don't support identity theft, I wonder what kind of palace intrigue and other political havoc could be wreaked on the regime with carefully orchestrated posts and tweets. Maybe we should connect Anonymous with a select team of Koreanophonic writers.