Picture of the Day: Lee in Dallas 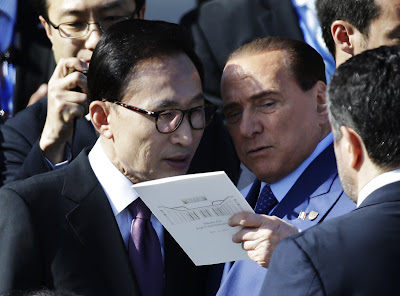 No, not that Lee in Dallas. Former South Korean Lee Myungbak, at left, speaks with Italian Prime Minister Silvio Berlusconi before the dedication of the George W. Bush presidential library on Thursday, April 25, 2013, in Dallas.

Given South Korea's prominent role as a supporting nation during the Iraq War — though they saw little action in the relatively peaceful Kurdish portion of Iraq, South Korea had the third largest military contingent in Iraq after the US and the UK — it's hardly a surprise that the South Korean president, himself a strong proponent of the ROK-US alliance, would be invited. (Lee's predecessor, left-leaning Roh Moohyun, took a major hit with his base by sending troops to participate in this unpopular war.)

I'll ask the obvious question: What is up with Lee Myungbak's neck?

Here's my other favorite photo: Dick Cheney as a tough cowboy. 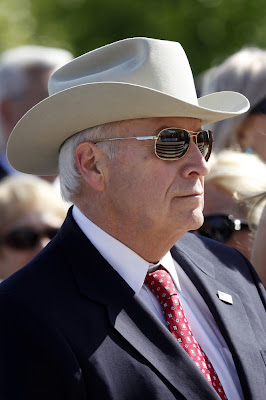