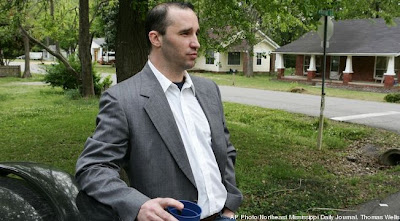 This is only peripherally related to Korea — taekwondo being the signature martial art associated with Korea — but the guy the FBI is now focusing on as a suspect in sending highly poisonous ricin to President Barack Obama and a Republican US Senator from Mississippi runs a taekwondo tojang.

I guess another connection could be that "ricin" sounds like "rice," which is a major staple of the Korean diet.

Forty-one-year-old James Everette Dutschke is also facing child molestation charges, but that is no real connection to Korea.

UPDATE (April 28, 2013):
In a pretty lame story, the Los Angeles Times referred to the guy as "a karate instructor" (HT to Wangkon). While it's disappointing that writers Matthew Teague and Shashank Bengali see Korean and Japanese stuff as same-same, maybe we should just let the Japanese have this one.