Pope prays for peace in Koreas in Easter Sunday message 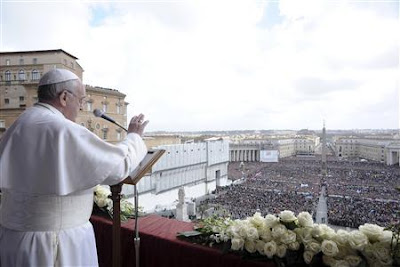 Well, it's got to be a big news story on the Korean Peninsula if they're paying attention to it over in Europe.


Pope Francis, appearing before more than 250,000 people for his first Easter Sunday address, called for world peace, respect for the environment and a diplomatic solution to the crisis on the Korean peninsula. ...

"Peace in Asia, above all on the Korean peninsula: may disagreements be overcome and a renewed spirit of reconciliation grow," he said, speaking in Italian.

North Korea said on Saturday it was entering a "state of war" with South Korea. Tensions have been high since North Korean leader Kim Jong-un ordered a third nuclear weapons test in February, breaching U.N. sanctions and ignoring warnings from North Korea's sole major ally, China, not to do so.

If you want to do something really cool, Papa Francisco, book an economy class seat to Beijing and then make your way to Pyongyang on Air Koryo and have a face-to-face with the Young General about how to go about bringing love to North Korea and the Peninsula.