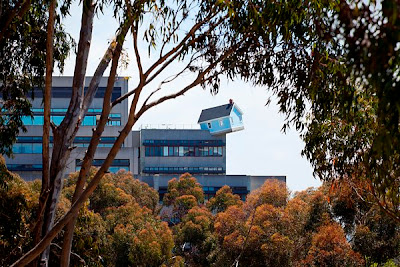 South Korea-born artist Do Ho Suh's "Fallen Star" permanent installation atop Jacobs Hall at the University of California at San Diego looks way cool, but to those dinosaurs stuck in the era of "Hyun-die" and "Kia means 'killed in action'" jokes, a building on the verge of a destructive collapse may too easily evoke images of the Sampoong Department Store or Sŏngsu-daegyo Bridge.

The feeling he's going for is one of displacement, a theme of his since leaving Korea for Rhode Island in 1991:


Perched on the corner of the seventh story of Jacobs Hall, above the busy artery through Warren College, the 15-by-18-foot house looks, indeed, like it came crashing down from above. (Actually, it was built on the ground and hoisted to its site last November.) A classic New England cottage, painted light blue with white trim, it was modeled after a home in Providence, near where Suh lived. Inside, the place feels cozily lived-in, a quilt draped over one chair, the couch scattered with throw pillows. Newspapers and an open bag of candy clutter the coffee table. A child's drawing is pinned to one wall, near an array of old cut-paper silhouettes. Near the door hangs a small needlepoint of a house, an image of domestic serenity.

This home too feels like a place of refuge, passed down through the generations — except for the fact that it rests at a stomach-flipping tilt and hangs over a daunting drop.

"The slope of the floor is only five degrees, which is not that much," Suh says, seated on one of the Adirondack chairs in the quaint garden leading up to the house. It's enough, however, to disturb the body's natural equilibrium, and most visitors will reflexively grip the door frame as they enter.

I'm a sucker for Korean modern art. Though I haven't been there in quite some time, the Museum of Modern Art in Seoul Land (located not in Seoul but Kwachŏn/Gwacheon) is a place I highly recommend if you haven't been. In the meantime, I will definitely check out this piece when I'm next in SoCal. 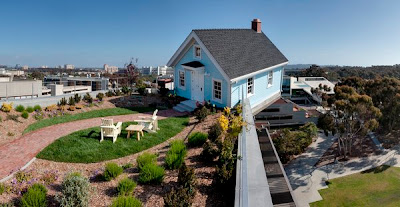