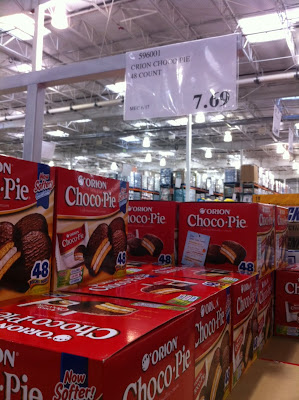 Costco in Honolulu is selling ChocoPie in bulk, and Orion is trying to market it as a health-conscious snack. It only has 120 calories (per pie?) and it's pretty darned cheap (48 of them for $8... why, we could feed all of North Korea!). 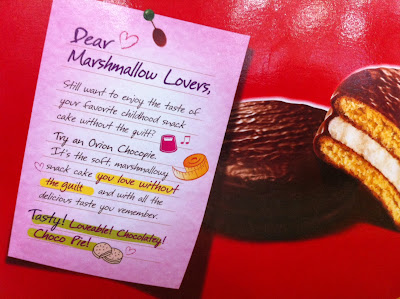 Anyway, I was tempted to buy some after an unfortunate food sampling incident. I'm one of those people who will walk into a Costco and sample everything. Not because I'm cheap (though I am) but because they usually have some pretty good stuff out.

Well, I grabbed some curry-looking stuff and gave one to "M" (who swears she thought ChocoPie were from Japan) and even though it didn't smell like curry we ate it. After all, we could see there were grains of rice and something that looked like carrots and chicken.

And indeed, that's what it tasted like, except it tasted like it coming up the wrong way. As in regurgitated. Seriously, by far the most disgusting thing I'd ever eaten at Costco. Then I finally looked at what it was: bulk emergency rations. As in food that you can store in your fallout shelter for a few years (I guess there are enough power outages from hurricanes and earthquakes on this island metropolis that it's not a bad idea).

Really, if that's all I have to look forward to, I hope the crisis takes me first (nah, maybe I'll try to go kill a wild boar).

The vomit taste persisted, which was why I was going to get the ChocoPie. But then I calculated 48 times 120 and I realized we were talking 1-2/3 pounds of weight gain.

At any rate, I wanted to point out that, at least on Oahu, there are more and more signs of the Korean wave. Sam's Club is selling Jinro soju, and kalbi is, well, it's ubiquitous. They even have it at the Golden Palace in Chinatown, my favorite dim sum place.