No man is an island, but this man owns one 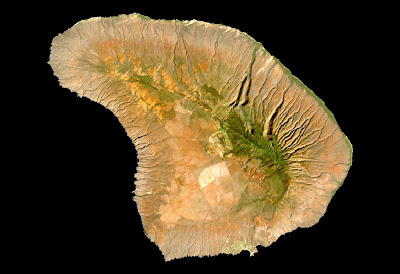 I was going to go with the title "Ellis(on) Island," but that has already become a cliché. The big news here in Hawaii is that Larry Ellison, the billionaire who runs Oracle, has bought out David Murdock, the 89-year-old billionaire who owned 98% of the island of Lana‘i.

Lana‘i is the smallest of the main islands one can freely travel to (Ni‘ihau is smaller but it's privately owned and I think they'll shoot you if you land without permission). It's the one that's shaped like an apostrophe [’], an upside-down ‘okina.


Its nickname is "the Pineapple Island," because it once was home to the world's largest pineapple plantation, run by Dole. But the pineapples of the Pineapple Island are like the oranges of Orange County: there's nothing left but a historical footnote. Mr Murdock decided to put an end to all that after bailing out Castle & Cooke, one of the "Big Five" (Hawai‘i's historic versions of chaebŏl-zaibatsu) that used to control Hawai‘i, and his plan was to expand tourism. 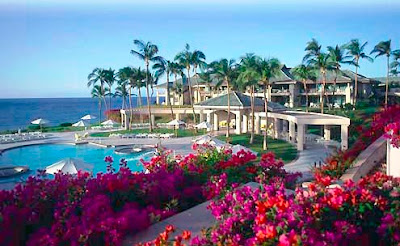 There is a very nice and very reclusive Four Seasons Manele Bay resort at the southern tip, but the thing about uprooting a dominant agriculture industry is that you're left with a bunch of untended fields. Except for the well watered resorts and Lana‘i City in the cooler central highlands, the place is awash in ruddy dust, evoking images of a Mars-like landscape from what I've been told.

Developing the place will be a challenge. This is what The Wall Street Journal had to say about it:


What isn't clear is how exactly Mr. Ellison might be able to make the island assets start paying off. He didn't respond to requests for comment, nor did an Oracle spokeswoman.

Local residents cite challenges that include limited air service to the island and a lack of nightlife to entertain tourists, though golf and outdoor activities there are highly regarded.

Among the potential options are building more homes to sell, adding rooms to the two Four Seasons resorts on the island or building a third resort, said Joseph Toy, president of Hospitality Advisors LLC, a Honolulu-based consulting firm specializing in the hotel and tourism markets.

The isolation, though, can be something of a selling point for those who really want to get away not just from it all but also from them. Honolulu is a city of nearly a million people in the middle of the ocean, so celebrities have eschewed O‘ahu for Kaua‘i and Maui, but even those are chockfull of tourists. Lana‘i and its three thousand residents are secluded just enough, but still have a luxury setting amidst some beautiful coastline. Bill and Melinda Gates (of the Bill and Melinda Gates Foundation) chose to get married here in 1994.

Were Mr Ellison to bring back agriculture, it would be some welcome greenery, perhaps making it more financially feasible for us in urban Honolulu to "eat local." But Lana‘i is a dry island in the "rain shadow" of Maui's 10,000-foot Haleakalā, and its own mountains aren't high enough to trap much moisture. If agriculture competes with luxury resorts for scarce water, Mr Ellison might decide not to plant anything. 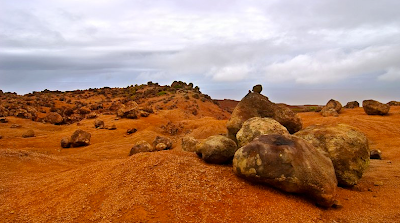 I think there's a great challenge out there for the fifth-richest person in America to make Lana‘i work: he's got the resources to make a self-sustaining island that can thrive with agriculture, tourism, and a local economy. Use your resources to develop technologies that will feasibly produce the water needed for everything. Go ahead with the wind farm that will supply not just Lana‘i's needs but those of Maui and O‘ahu. And geez, there's enough sun for all sorts of renewable energy projects.

Thinking about the future of Lana‘i got me thinking about Korea, which is the real impetus for this post: If you could own a whole island in Korea (or 98% of it), what would you do with it? Off the west and southern coasts, South Korea is full of islands big and small. If Wikipedia is to be believed, there are more islands in Korea than there are in Japan (the definition of an island may be different, though, so it could be misleading). 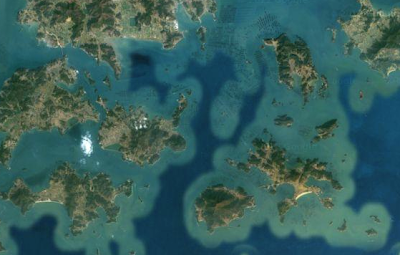 The Korean Archipelago supposedly contains 3579 islands, a few of which are as comparable in size to Lana‘i (which is almost exactly the same size as Chindo). Wouldn't it be cool to own one? If I did, and assuming I had the kind of money one needs in order to buy an island, I'd set out to do what I just recommended to Mr Ellison: show the world how environmentally friendly sustainability can be done. Of course, then I'd be tempted to declare independence and then everything would go to heck.