If you're bored, why not head to the White House site and sign a few petitions? 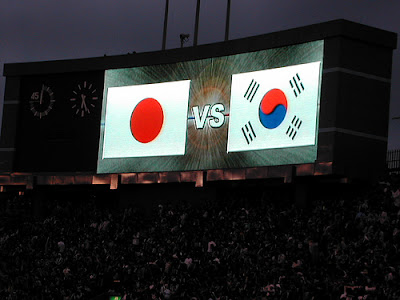 UPDATE:
Hmm... methinks I deserve a hat tip. (unless the Unix user in Seoul who found this on my blog was not The Marmot). [insert winky icon here]

ORIGINAL POST:
The Japanese-forced-amnesia versus Korean-emotional-(what's a word for always remembering?) is being played out in the ladle of democracy, the United States of America.

Pick your poison (the text contains the link):

From the western shores of the East Sea, as well as the Jersey Shore...

And from the other side of the Nihon Kai...

Note the uncharacteristic lack of emotional restraint represented by the exclamation point.

Anyway, if you're confused about who is supporting what, just take a look at the names in the respective set of signatories (e.g., Yoon hee K, Jinsung J, Hyesung P, etc., versus Kenji K, Otsuka K, Gerry B, etc.).

And remember, your side doesn't get an official White House response unless you hit 25,000 signatures (though the latest birther nonsense, claiming that all birth certificates in Hawaii are suspect because Japanese were buying bogus documents in the 1950s and 1960s, suggests BHO may in fact be from the Land of the Rising Sun and favor Japan over Korea, plus there's a town called Obama in Japan).