Is AP's Pyongyang bureau finally getting around to reporting some less-than-flattering stuff? 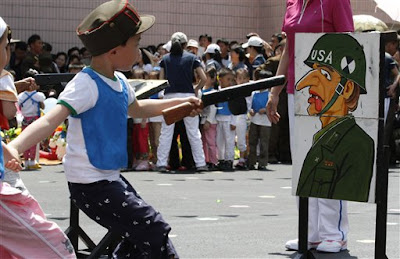 Over at One Free Korea, Joshua is highly critical of the Associated Press's presence in the North Korean capital, largely because of whatever secret agreement may have been penned between the AP and the DPRK about what to report. In short, it sometimes seems as if AP and their correspondent Jean Lee are unwittingly (or wittingly) playing the role of propaganda cogs.

But there are occasionally AP stories from Pyongyang that paint that harsh reality, including this one on how the hate-on North Koreans (are supposed to) have for the United States starts early:


For North Koreans, the systematic indoctrination of anti-Americanism starts as early as kindergarten and is as much a part of the curriculum as learning to count.

Toy pistols, rifles and tanks sit lined up in neat rows on shelves. The school principal pulls out a dummy of an American soldier with a beaked nose and straw-colored hair and explains that the students beat him with batons or pelt him with stones — a favorite schoolyard game, she says.

For a moment, she is sheepish as she takes three journalists from The Associated Press, including an American, past the anti-U.S. posters. But Yun Song Sil is not shy about the message.

"Our children learn from an early age about the American bastards," she says, tossing off a phrase so common here that it is considered an acceptable way to refer to Americans.

North Korean students learn that their country has had two main enemies: the Japanese, who colonized Korea from 1910 to 1945, and the U.S., which fought against North Korea during the 1950-53 Korean War.

They are told that North Korea's defense against outside forces — particularly the U.S., which has more than 28,000 soldiers stationed in South Korea — remains the backbone of the country's foreign policy.

And they are bred to seek revenge, even as their government professes to want peace with the United States.

"They tell their people there can be no reconciliation with the United States," says American scholar Brian Myers, who dissected North Korean propaganda in his 2010 book "The Cleanest Race: How North Koreans See Themselves and Why It Matters." ''They make it very clear to the masses that this hate will last forever."

I don't know, though, if it was Jean Lee who threw in the interview with Professor Myers (who, no offense, is a bit of a one-trick pony when it comes to North Korea; just what will he do when/if North Korea shifts or scraps its propaganda tactics?).

If North Korea's propaganda machine really is approving AP's copy, maybe Ms Lee was able to get away with this piece because it included the "new direction" they want the world to think the Pyongyang regime is taking:


In recent years, state propaganda has shifted away from the virulent anti-American slogans of the past and has instead emphasized building up the economy. On the streets of Pyongyang, anti-American posters have largely given way to images of soldiers in helmets and workers in factories.

But is this new propaganda message a smoke screen or an indication of at least one faction's hope for change? I'm not sure myself, but I'm also not so certain that the most vehement of Pyongyang's critics can even allow for the latter to be happening even if it really were.