The first video at this Scroozle post is purported to be from MBC. It seems intended to scare people about relations with foreign residents and, given the wording used, seems to smear the whole lot of them with nasty allegations (HT to The Marmot).

I'll deal with this more when if I have some time (I haven't even been able to scrutinize the English captions vis-à-vis the original Korean, which is always prudent in cases like this, lest someone ramp up the translation to make it sound even more inflammatory), but for now I'll just say that this is the kind of thing that needs to be called out. Sure, there really are some nasty foreigners who come just to score jobs and girls, and they violate a cultural taboo when they talk about it more than when they do it, but MBC is taking a wide brush approach that is meant to smear.

I couldn't find a way to extract the video from the post, and that means I should probably also address Scroozle's second video, which is of an immigration official giving a PowerPoint-type information briefing to teachers on laws and regulations in very stilted English pronunciation. Scroozle is tying this video to the first because it's "about rising foreign crime rates and the need for HIV testing," which the English-teaching crowd has largely taken to be xenophobic and racist. 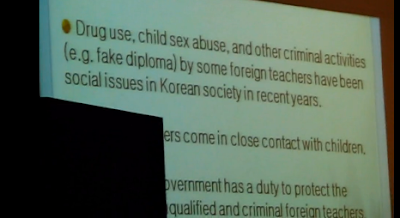 The slideshow included this language:


Drug use, child sex abuse, and other criminal activities (e.g., fake diploma) by some foreign teachers have been social issues in Korean society in recent years. [emphasis mine]

It is reasonable to expect that people working with children should be subject to criminal background checks. Ditto with people who are coming in to work in another country, if that country so chooses (local Korean nationals who have committed crimes are in the Korean national crime database, and criminal background checks from their respective countries brings it up to a similar level, though I agree this has been handled in a ham-handed way sometimes).

On the matter of HIV testing, though, I've stated over and over again that I don't agree with the "HIV mentality" of the anti-testing opponents. HIV testing should be a public health issue, but we're still stuck in a 1985 loop treating it as a human rights issue because of associations of AIDS with homosexuality at a time when gays were mostly in the closet. Never mind that 1 in 200 people in the US (which tests incoming Korean nationals for tuberculosis) is infected with HIV, a rate thirty times higher than in South Korea, and early detection prevents its spread and allows for crucial life-saving treatment. [I fixed this sentence after Schplook pointed out my error in the comments section.]

Ah, but I realize that I'm never going to convince much of the English-teaching crowd that mandatory HIV testing (which is done on a large scale among the native Korean population as well) is anything but racism and xenophobia, so my criticism that the MBC video should have stood alone would probably be roundly booed.

But I'll end this with Scroozle's valid points about the MBC video, because that's where the real outrage should be directed:


This type of BS is exceedingly hurtful. It creates an air of distrust between foreigners and Koreans. It attempts to shame Korean women into staying away from foreign men. It damages Korea’s international image.

The country is expected to host the 2018 winter Olympics, and yet programing such as this continues to be produced.

Valid points. I'd like to check out a link to this video on the MBC website both to see what viewers are saying. I'm sure there are lots of yahoos leaving, "Yeah! Stupid foreigners!" type stuff (and if you think that doesn't exist in the US, go look at the comments section in just about any online source talking about how one public school in New York City has decided to offer Arabic in its curriculum).

But if I'm reasonably certain a good chunk will, if this translation is correct, be knocking MBC for this xenophobic crap that runs counter to the 다문화주의 mood that is gripping the nation.

In the meantime, head to MBC's English-language contact page for a list of emails addresses. Most are related to sales and marketing (Korean wave!) but the "international relations" one might be useful for expressing a politely worded but stern email about your disappointment.

UPDATE:
Roboseyo has a very well reasoned post on this, where Msleetobe has posted contact information for the Korea Broadcasting Commission:


If anyone wishes to file a formal complaint, this is where it can be done: 방송통신위원회 (I believe it's the Korean Broadcast Commission) 02-750-1114 ...press 2 for English.

I think this a good idea. Calling gets them to sit up and take notice in a way that blogging in English does not. But be nice when you call. They didn't do it.