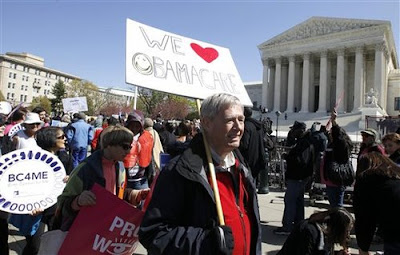 It looks like the big SCOTUS decision on Obamacare will come while I'm in the air, flying from Honolulu to Fukuoka (and then on to Seoul). Major news, like the death of KJI, tends to come while I'm flying across the ocean.

To make this Korea-related, if the ACA is overturned, that means I'm stuck living in Korea or Hawaii.

Anyhoo, while we wait, take time to read this excellent piece on Republican hypocrisy as it pertains to the actuarily sound insurance mandate:


The individual mandate in the health care law was originally proposed by the Heritage Foundation, the most conservative think tank in the country. It was supported by almost every Republican in the country, including the first President Bush, Mitt Romney and conservative stalwarts like Orrin Hatch. Simply put, it was a conservative idea. There is no question about that; it is a fact.

Let me immediately digress to point out how terrible our media is since about 2% of the country knows that fact. If you asked the average American now, I'm sure they would say it was a liberal idea originally proposed by Barack Obama. Another fact -- Barack Obama was originally opposed to the mandate during his campaign for president.

So, this brings us to the central problem with President Obama's administration. They were under the unbelievably mistaken impression that if they worked with the Republicans, compromised with them and gave them what they wanted, that the Republicans would react likewise. Progressives (and anyone that was paying attention to politics in the last decade) warned them that would not be the case. We were dismissed. Now look at what's happened.

Not only did the Republicans not thank the president for including their mandate in the health care law, they have turned around and pretended they are against it. But of course it goes much deeper than that. In fact, they are now using it as the principal argument to take down the whole law.

Oh, and kudos to the Supremes for not going and completely legalizing "driving while Mexican." must've taken restraint.