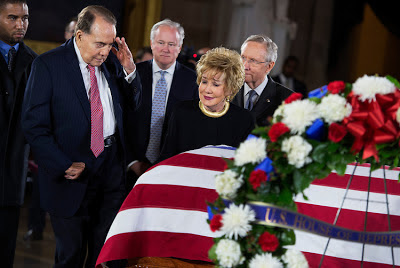 I find this news photo touching in so many ways. On the surface, it is one lion of the US Senate paying his respects to another, recently departed, lion of the US Senate. It was taken as Senator Daniel Inouye, who would have marked his fiftieth anniversary in the Senate next month, lay in state in the US Capitol, an honor reserved for fewer than three dozen people throughout US history.

But this photo is much more than that. These two men had great respect and friendship with each other in their decades of service in Washington, even though they were on opposite sides of the aisle (Bob Dole, a Republican from Kansas, and the late Daniel Inouye a Democrat from Hawaii). This is something we should never let be relegated to a bygone era: Both parties need to end the rancor and reach out to each other as Americans first and members of their party as secondary or tertiary components of themselves.

Finally, these two men shared much more. Both lost a limb fighting in World War II. Their sacrifice, and that of hundreds of thousands of dead and millions more who risked life and limb, is something that should never be forgotten.

(The only way this picture could be improved is if Senator John McCain, another Republican friend of Senator Inouye, who was held captive for years by the Viet Cong during the Vietnam War, were in the view.)