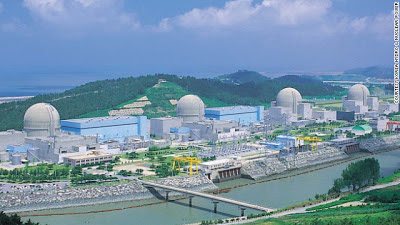 With much of South Korea's nuclear power now off-line, and the country dipping into record cold temperatures, there is a risk of rolling blackouts, which could be a real danger for a lot of people (extremes of heat and cold tend to disproportionately affect those on the fringe, especially socioeconomically or chronologically).


South Korea set a new record for power consumption on Wednesday, the third consecutive day of very cold temperatures and busiest work-wise after the lead-in and celebration of Christmas.

And the country’s energy monitors were forced to warn that power outages might occur because demand had surpassed the limit that the government considers safe.

The Korea Power Exchange, which monitors supply and demand, makes the information available in real time on its Web site in Korean here and in English here.

Wednesday’s demand peak was higher than the energy consumed on Sept. 15, 2011, when the government resorted to rolling blackouts for several hours because an unusual surge of late summer heat propelled demand for air conditioners.

That near-disaster led to the resignation of the country’s commerce minister, who is in charge of energy issues, and sharp criticism from President Lee Myung-bak.

The WSJ doesn't really go into it, but South Korea has for quite some time been heavily reliant on nuclear power, but there have been literal cracks in the system that have caused alarm, as well as other issues that have led to a reduction in power generation right now.