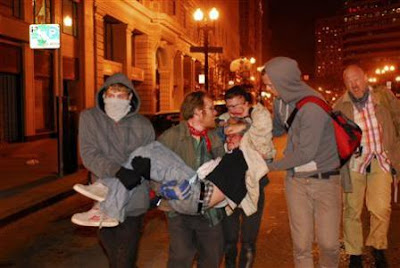 When I heard about Occupy Wall Street protester Scott Olsen, who was severely injured in Oakland, California, after being hit by a fragment from a tear gas grenade (or something else as bad), I couldn't help but make the connection with Lee Hanyŏl (이한열), the Yonsei University student who died twenty-four years ago after being struck in the head with shrapnel from a tear gas grenade that detonated over his head. 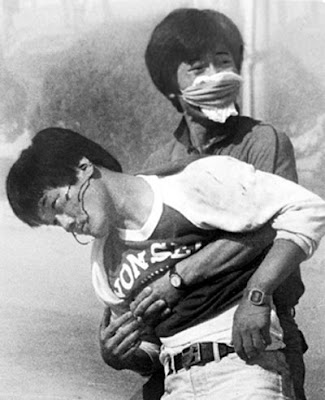 Mr Lee's death became a catalyst for wider protests that drew in everyday citizens outside the protest-prone universities. Although Mr Olsen is thankfully on the mend, one wonders how things might have changed had this injury been fatal.

Of course, having an inadvertent (near-)martyr is one of the few similarities between US11 and ROK87. For starters, what the students and other citizens were fighting for in 1987 was much clearer than what the OWS crowd is after, which is what exactly? In 1987, the goal was well defined: to get direct elections that had been promised in the wake of Park Chunghee's death, and many of the people were willing to pay with their freedom and possibly their lives.

By contrast, in the United States we already have the open elections South Koreans were fighting for. The problem is that Americans have allowed their democracy to erode. They stay home instead of voting, and they fail to push for effective reforms that would curtail the ability of moneyed interests to control their electoral process and thus the pursestrings.

And I suspect that many of the "occupiers" wilt in the face of a tear gas cloud. Well, so do people in Korea, but the latter, at least back in the 1980s and 1990s, walked into the situation expecting to be gassed, and possibly even craving it. You were no one if you'd never inhaled the burning waft.

If you've never been teargassed, let me tell you it's not a pleasant experience. Sting gas would be a more appropriate name for the stuff, because it does just that, and it gets into your facial orifices, from your nostrils to your eye sockets, and it stays there. It debilitates you, making you unable to run away and sometimes blinds you so you can't even walk very far. Nasty, nasty stuff.