So I spent much of the day yesterday at Ala Moana Shopping Center, Honolulu's premier mall and a mecca for tourists (Japanese and Korean in particular). Armed with my iPhone 4, I like taking pictures of the mundane stuff all around me, though some of it seems downright iconic at times. 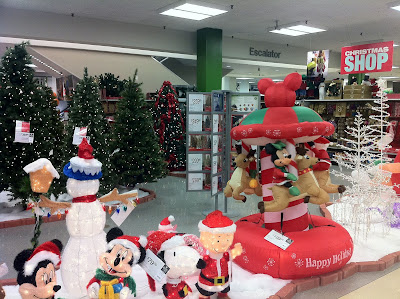 Our first stop was Sears, where "M" was shopping for a golfing-related gift for her mother. While Sears's selection of cutesy golf stuff was extremely limited (i.e., nothing), they were already going full force with Christmas paraphernalia. Mind you, it's October — the beginning of October, not even Columbus Day — and this is what's on display. I guess they really want to corner the market early on being the "Christmas Shop." 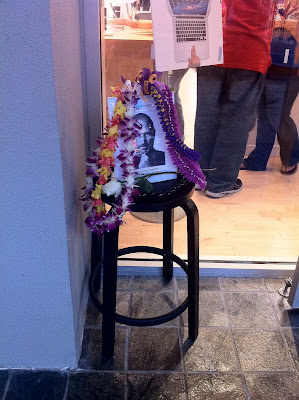 I actually did go into the Apple Store to see if they knew what time on October 7 they would start pre-orders for the iPhone 4S (I'm not getting one, but "M" wants to upgrade from her two-year-old iPhone 3Gs). I have to admit, I was also curious to see how the Apple Store might be honoring Steve Jobs. As I expected, there was a picture with people laying leis around it.

I'm guessing the Ala Moana powers-that-be, who don't even like you plugging in your laptop in the food court because it distracts from the aesthetic appeal of Panda Express and some burger shop behind you, may have been telling the Apple Store folks to keep the outdoor memorial low key and as neat as possible. Actually, the above setup was originally on the ground, but by the time we did our respective shopping and came back this way, someone had thought to put a bench out for the picture. By the way, we weren't the only ones taking pictures of this.

And then there's this. I wear a small or medium at Old Navy, but I couldn't help but notice this XXL shirt. Please note what is written just below the plus-sized size.

Oh, and kudos to Old Navy for not making everything in China.