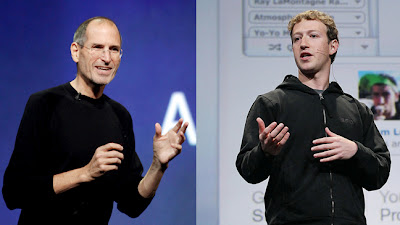 
In interviews with his biographer Walter Isaacson, Jobs said he respected Zuckerberg for not selling out and for dominating social networking.

"You know we talk about social networks in the plural but I don't see anybody other than Facebook out there. It's just Facebook. They're dominating this," he told Isaacson. "I admire Mark Zuckerberg. I only know him a little bit, but I admire him for not selling out. For wanting to make a company. I admire that a lot."

The admiration was mutual. When Jobs died Oct. 5 after a long battle with pancreatic cancer, Zuckerberg paid tribute on his Facebook profile: "Steve, thank you for being a mentor and a friend. Thanks for showing that what you build can change the world. I will miss you."

Zuckerberg is frequently mentioned as a possible heir apparent to Jobs.

Jobs said he felt an obligation to counsel other entrepreneurs since Silicon Valley gave him so much. Yet he did not dole out praise easily. He told Isaacson that Microsoft and Google "just don't get it."

He saved his real venom for Google and vowed to destroy its mobile phone business, Android. Jobs had served as a mentor to Google co-founders Larry Page and Sergey Brin and had welcomed Google executive chairman Eric Schmidt to the Apple board. Google went on to launch Android, which is the main competitive threat to the iPhone.

Yikes. I can't say I've been immune to wishing destruction on my enemies (and occasionally plotting but rarely doing — rarely), but it sounds like Mr Jobs was someone whose bad side you'd want to steer clear of. As for the idea of Mr Zuckerberg as an "heir apparent" (whatever that means), all I can say is, God help us!

My beef with Facebook is that Mark Zuckerberg simply does not know the meaning of privacy. He seems to see secrecy as evil in and of itself and he does not understand that if we share something with one person that doesn't mean we want to share it with everyone else. In fact, he has made it clear he thinks people don't need to keep things from others, yet most of us in society realize (and I'm a tad bit older than Mr Zuckerberg, so maybe this is coming from experience) life is, necessarily, compartmentalized.

But maybe I don't want my thirteen-year-old niece to head to the comment her Facebook account says I left at the Los Angeles Times or New York Times and read my adult views on, say, marijuana legalization or my nuanced opinions on the rights of sex offenders, m'kay? But Facebook has insinuated itself so much into our online lives (which seep offline as well) that we end up commenting with our Facebook profiles when we didn't intend to.

Truth be told, Apple lately has also started pushing the envelope with privacy in a way that concerns me, but at least with iOS on my iPhone it's situations where I'm getting something in trade (an easier time finding something nearby or location-specific information, etc.). I'll keep my iPhone — for now — but at this point I keep a barebones Facebook profile only for commenting on sites that essentially require them, or for people whom I lost track of in the 1990s or earlier to get in touch with me (after which, I communicate with them by email, phone, or Skype).

It's kinda funny, though, to think about how this whole issue stands in marked contrast with Korea. When you're expected to hand over your Republic of Korea identification card number for just about any Korean-language online service, perhaps we get inured to that fundamental stripping away of our protective privacy shell. It no longer bothers us because, well, we're just so used to it... and nothing bad has happened — so far.

Back in America, however, where much of the problem with, say, illegal immigration or the threat of terrorism could be solved or mitigated with a national ID card, we scream bloody murder about government overreach and control. Yet at the same time, so many of us willingly hand over personal data to Facebook and so many other services.