The view from Pyongyang 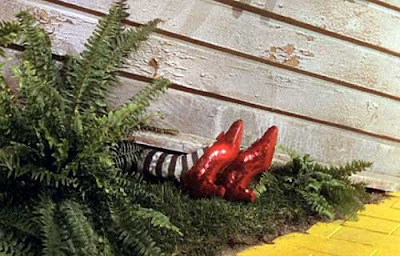 With the death of Libya's deposed strongman Moammar Kadafi, perhaps this is as good a time as any to revisit what we've learned. Or rather, what the Pyongyang regime has learned. We've talked about this before, the lessons Pyongyang can glean from Libya.

In the recent past, I have said that the DPRK leadership has learned two things. From the Jasmine Revolution: Control information technology like your life depends on it, because it really does. From Libya's recent concessions with the West: Never, never, never, never give up (your nukes).

But now that Kadafi has been chased into a hole just like Saddam Hussein and then shot, let's address a third lesson.

I have suggested, and still do, that one of the things for Kim Jong-il to learn is that maybe it's better to take a deal:


I have long advocated that the powers-that-be in Seoul, Washington, Tokyo, and perhaps Beijing have on the table the same type of deal for North Korea's ruling elite, should disgruntlement with the regime ever erupt into a full-blown challenge to its authority.

As hard as it might be to stomach, it might make for a far smoother demise of the DPRK if Kim Jong-il, his family, his inner circle, etc., are just simply allowed to leave. If they are allowed to make an orderly play for the exits, it might mean less bloodshed (including attempts to attack the South or Japan in a desperate last-ditch attempt to rally the North Korean people), and it might also mean a quicker departure and thus a speedier end to the regime.

This is an important lesson for the Kim Dynasty because when things start to head downward, they do so at an accelerated 9.8 meters-per-second-per-second. The Norks are already trying their darndest to keep information out, particularly information about the Jasmine Revolution. North Koreans who are forcibly repatriated or voluntarily return are persona non grata with the regime, while average citizens are restricted from traveling even to neighboring counties lest they spread gossip or dissent.

But dictators across the Arab world also thought they had things under control, including Colonel Kadafi, and now he's dead. The same thing is plausible in North Korea, given the right circumstances. And if it comes down to that, take the deal, Mr Kim. Because they will hunt you down, they will find you, and you (and possibly your family) will end up dead.