There's a scene in one of the Planet of the Apes movies where the tough apes halt at the edge of the river as they pursue the humans because, well, they're afraid of water. I've always associated that scene with the Mongol invaders who took over nearly all of Korea — and most of Asia and a good chunk of Europe — on horseback but who stopped at the narrow sliver of water that separates Kanghwa-do Island from the Korean mainland, beyond which strait Korea's royal family was hiding in exile.

Yeah, the Mongols and water didn't mix so well. Yet there they were in 1274 and again in 1281, trying to cross the Korea and Tsushima Straits, in order to take over Japan. Their resounding defeat became a nation-defining moment for the Japanese, giving rise to the concept of kamikaze, gods of the wind, who supposedly came in and provided divine intervention that spared the archipelago from the horsemen of the steppe. (Some have suggested shoddy workmanship on the Korea-made boats — possibly deliberate — may have had as much to do with the Mongols' defeat.) 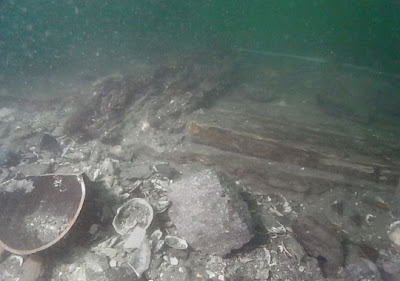 Anyway, it was a few days ago that the Japan Times had news that, amazingly, the largely intact wreckage of one of the Mongols' vessels was found a meter below the seabed off Nagasaki:


The wreck of a ship believed to have been part of the ill-fated attempts by Kublai Khan, the Mongol ruler of China in the 13th century, to invade Japan has been found lying relatively intact under the seabed off Nagasaki Prefecture, a team of Japanese researchers said Monday.

It is the first wreck linked to the invasion attempts to have been discovered in Japan with much of the hull still intact, including a 12-meter section of the keel and rows of planks 10 cm thick and 15 to 25 cm wide attached to the keel, according to University of the Ryukyus professor Yoshifumi Ikeda and his team.

Discovered about 1 meter under the seabed in waters 20 to 25 meters deep off Takashima Island in Matsuura, Nagasaki, the wreck of the vessel, believed to have been over 20 meters long, is expected to provide archeologists with crucial information on the Mongol attacks in 1274 and 1281, which until now have been known mostly from documents and drawings.

"I believe we will be able to understand more about shipbuilding skills at the time as well as the actual situation of exchanges in East Asia," Ikeda told reporters in Nagasaki. He added that the wreck likely remained relatively well preserved because it was buried under the sand.

Both sides of the keel were painted whitish gray. The planking was held in place by nails. Bricks, ink stones and weaponry used by the Yuan Dynasty were found in the ship's bottom.

Now that's something I'd pay to see in a museum. Very cool. One wonders what else is sunk below the mud. Maybe off the coast of Yŏsu they can use the same technology to find a kobuksŏn, the so-called "Turtle Ship" that helped Admiral Yi Sunshin defeat the Japanese when they invaded Korea about three centuries later.