Is it all over for the Grand Prix in Korea? 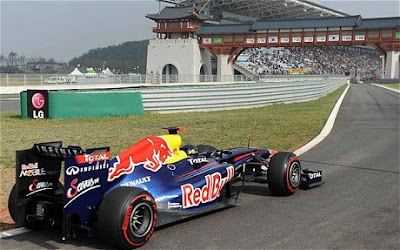 After a great deal of handwringing about safety, accommodations, and track preparations (and here and here) and safety, F1 racing's Grand Prix finally came to Korea — way down south, away from all the people — about a year ago. And while there were plenty of glitches, promoters were confident that things would go more smoothly next time when they weren't in such a hurry.

But if The Telegraph is correct, there may not be too many "next times":


Korea’s future is looking decidedly dicey. The promoter of the Yeongam event, Won-Hwa Park, said earlier this month that he wanted to seek a cut in the estimated £35 million hosting fee because of the huge losses the event is facing. According to local media, the total cost for the race this year was £52 million, with income from tickets estimated to be only £16 million.

Korea’s current deal, which runs until 2016, includes a 10 per cent escalator for hosting rights over its duration.

“There are lots of things in life you can’t afford, and you don’t have to have them,” Ecclestone said. “And it took us long enough to negotiate with them in the first place.”

Of the local lack of support, the 80 year-old added: “It was strange. They didn’t really get behind it. That was a disappointment because it was a big enough effort to get it on in the first place.”

It would have been nice to know about the governing body's fickleness before all that money was poured into the project.

To be fair, it's not just Yŏng•am complaining about the high hosting fee. And it may take a little time for support to grow, as it is a nascent "sport" in Korea. There certainly are lessons to be learned about publicizing such a new event in a place without much of a tradition of car racing.