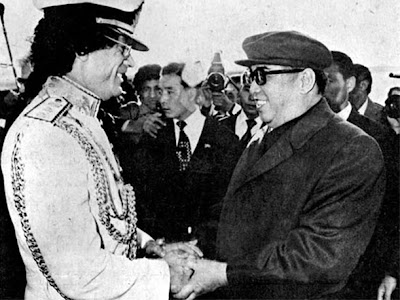 Welp, if you're a North Korean laborer in Libya longing for some home-cooked Hamhŭng naengmyŏn, you're just s.o.l. for the time being.

Last April, when the Arab Spring was just starting to kick up some sand, we had reports that Pyongyang was in no mood to have workers returning to the Workers' Paradise bearing news that one by one the dictators of the Arab world were falling like dominos as the people in those countries rose up against them. Even though some of them were getting injured in the air attacks.

And now, with the death of Colonel Moammar Kadafi, we see that this policy is continuing:


North Korea has banned its own citizens working in Libya from returning home, apparently out of fear that they will reveal the extent — and final outcomes — of the revolutions that have shaken the Arab world.

Pyongyang had a close working relationship with the regime of Moammar Gaddafi before the popular uprising that unseated him. That revolution was completed with Gaddafi's death at the hands of insurgents last week - leaving Kim Jong-Il as one of a dwindling band of old-fashioned dictators on the planet.

An estimated 200 North Korean nationals are in Libya and previously worked as doctors, nurses and construction workers, according to South Korea's Yonhap news agency. They had been dispatched to the country in order to earn the hard currency that Pyongyang requires to fund its missile and nuclear weapons programmes.

Yonhap reported that the North Korean nationals have been left in limbo, joining their compatriots who are stuck in Tunisia, Egypt and other countries with orders not to return home.

North Korean media has so far failed to report that Gaddafi is dead and the government has made no moves to officially recognise Libya's National Transitional Council as the legitimate governing authority of the country.

The decision to ban its own nationals from returning indicates just how concerned the North Korean regime is of the news leaking out to its subjugated people.

An editorial in The Korea Herald stated that the one per cent of North Koreans who are aware of the Arab Spring uprisings will be top-level party and administration officials, as well as the trusted few who are permitted to travel to China on business.

"Pyongyang’s silence about the fall of the dictators in Tunisia and Egypt and the bloody death of Gaddafi reveals Kim Jong-il’s awareness of the vulnerability of his regime in the process of a third-generation dynastic succession of power," the paper said.

And the DPRK nomenklatura are right to think this. With the Great Currency Obliteration of 2009, they have sown the seeds of resentment and may have lodged in almost every North Korean's head the notion that the regime is not on their side.

This blanket ban on returning to North Korea comes as no surprise to me. I wrote a few days ago that the North Korean workers in Libya are "persona non grata" back home as far as the regime is concerned. Of course, it could be worse: the regime might have welcomed them home only to send them to reeducation camps or worse. Maybe Seoul should be looking into helping these folks stuck in Libya, Tunisia, Egypt, and Syria gain asylum and eventual residency in South Korea.

Right now "s.o.l." means Sitting it Out in Libya.