Well, not so fast.

The Christian Science Monitor notes the very thing I was about to bring up, that ratification of the FTA by the US Congress is only half of the battle that remained. Now we must get the ROK National Assembly to do the same thing. And as they note, even though everybody's favorite leftist president, the surprisingly pragmatic Roh Moohyun, was in favor of the FTA, many in his party are poised to fight against it:


Estimates of the benefits vary widely, but some analysts in Seoul predict Korean exports to the US will go up 5 or 6 percent and two-way trade might increase by $10 billion – though Korea would still have a highly favorable balance.

The fear of a sharp increase in US farm exports, however, was expected to give Korea’s opposition Democratic Party ammunition for protests even though the party supported it while their late leader, Roh Moo-hyun, was president.

The most sensitive issue is the elimination of tariffs on imports of beef and pork. No one forgets the months of rioting in central Seoul in the summer and early fall of 2008 after Lee agreed, at a meeting at Camp David with George W. Bush, to accept American beef imports, banned for the previous five years amid fears of “Mad Cow” disease.

The tariff on beef, now 40 percent, will be lifted by 2026 and the tariff on pork, 25 percent will be eased until it’s lifted in five years.

Nonetheless, the dominant atmosphere in Washington and Seoul was upbeat after all the debate and haggling since the FTA was signed by negotiators from both countries five years ago.

Expect the chinboistas, as usual, to try to whip up anti-Lee and anti-US sentiment in order to torpedo the FTA and cause as much pain and damage to the administration as possible. 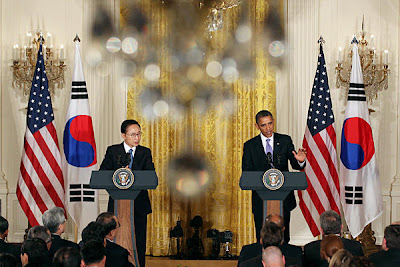