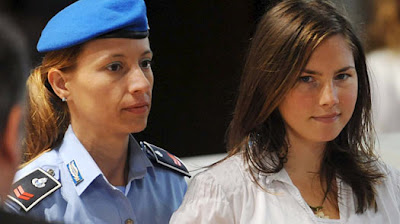 Some of you certainly are. At least according to Sitemeter.com, anyway. Since the girl-next-door cutie and possible murderer has again become a major story this past week, culminating with her 2009 conviction being overturned in the 2007 killing of her friend, I've seen a ten to twenty percent jump in hits to this blog.

And this is because Monster Island, inexplicably, comes in at #7 out of half a million sites if you are googling "Amanda Knox nude." Of course, I don't have such pictures — if I did would I be blogging for Mini Coopers?! — but because there's this post about a nude yoghurt fight listed in the side bar as one containing "nudity" and "nude," it comes up on the list. Not sure why it's in the top one-thousandth of a percent, though.

Email ThisBlogThis!Share to TwitterShare to FacebookShare to Pinterest
Labels: blogging