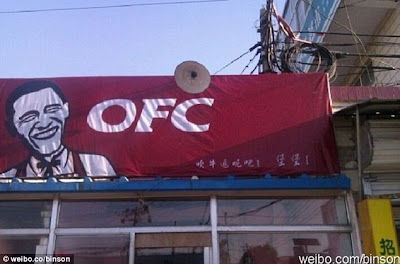 He's not a Colonel, but he is the Commander. Go here for the latest, logical, and, in hindsight, pretty darned predictable use of Obama's visage in China.

No doubt, since Beijing demanded a South Korean shop owner to take down an "offensive" sign that incorporated an image of Tiananmen Square but without the accompanying portrait of Mao Zedong (who was replaced by a dog), we should expect the same thing when the State Department asks nicely that the President's likeness not be used in this way.