The Los Angeles Times has an opinion piece on a proposal — yet again — to eliminate the penny, which has come to be a boondoggle:


A dollar bill, as we all know too well, is a fleeting thing. Not just because it leaves our hands so much more easily than it returns but because, as it changes hands, it wears out within about three years, and often sooner. A coin's life span, by contrast, averages 30 years. That's why several members of Congress are suggesting phasing out the dollar bill entirely and replacing it with a coin. The production savings could add up to $5.5 billion over those three decades, proponents say.

Coins are bulkier, but at least vending machines wouldn't spit them back out at us for having untidy corners or a crease here or there.

But if Congress wants to save money on money, there's no reason to stop at the dollar bill. The U.S. Treasury has been nickel-and-dimed for years on the production of nickels and, well, pennies, both of which cost more to produce than they're worth. The cost of a penny is volatile because it depends on the metals market — pennies are made of copper-plated zinc — but figures for 2010 put the price of producing 1 cent at close to 2 cents, meaning that the government loses a cent for every one it makes. With 7 billion pennies manufactured per year, that's almost $70 million lost annually.

I really like posts about money. And the penny is something I've long wondered about, including yesterday when Target handed me $9.94 in cash and coin for a shirt I returned.

It makes sense to retire the penny (the LAT article notes that this is done at US military bases such as Yongsan Garrison, where I'm completely happy with the situation), but I think the nickel is still valuable enough to keep it going. If anything, making the dime the smallest denomination of money might cause a creeping-up of perceived cheapness. What costs a dollar now — a hundred pennies — would be only ten dimes, maybe even with no second decimal place, and that psychological change might make some retailers offer things that are now $1 for an increased price of $1.2 or $1.3. This will have a push effect from below, causing prices in general to creep upward.

Mark my words, it will be a future installment on the Freakanomics podcast.

And if the nickel is that expensive to make, let's make them out of whatever we're making the pennies that will no longer be around. We'll call them "zincs" and we can grind them up and make tea when we feel a cold coming on. 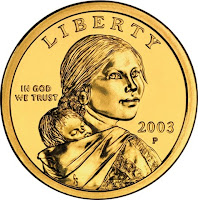 As for dollar coins as a solution, we have tried that and it's been kinda sorta a failure. Sure, the Susan B. Anthony dollars looked remarkably similar to quarters (darn you, GW and your girlish locks!), but the Sacajawea dollars were cool-looking, distinctive, and practical. Yet you hardly see them around. Maybe if there were no paper-based Washingtons at all, it would be different (but it would probably lead to increased demand for $2 bills).