Put them all together they spell Mofo

I used to be a huge fan of The Simpsons, but somewhere around the tenth year or so it really lost its way. After several years wandering in the wilderness, it has returned from the abyss, though it still has not reached the lofty heights of satire and wit of its heyday in the 1990s.

Nevertheless, The Simpsons Movie was well done (I half suspect they were saving their best material for the film) and it still occasionally makes me laugh out loud or remark on its cleverness. I don't watch it as religiously as I once did, but I still try to catch it.

Yeah, yeah. Kushibo needs to stop explaining what he watches and why (PBS's Newshour: your best bet for comprehensive and objective news coverage in America). Anyway, my point (and yes, I do have one), is that in the season opener, "The Falcon and the D'Ohman," The Simpsons had their guest flashbacking (it's a word now!) to when he was forced to write musicals praising the Dear Leader.

The flashback includes the opening of the musical, which starts with a young and vibrant Kim Jong-il (not sure how back the flashback flashes) getting off a bus in Pyongyang on his way to the palace, where a bystander tells him he's too benevolent to be the leader (said bystander is now making eel wallets for export in an undisclosed camp in North Hamgyŏng Province).

But Dear Leader-to-be proves he is by no means too benevolent, as he presents a chorus to sing his praises, as it were. To the theme of "M-O-T-H-E-R (A Word That Means the World To Me)," here are the lyrics: 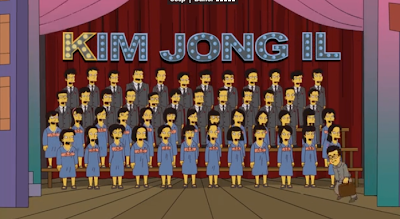 And the cringe-worthy but cleverly satirical lyrics cut off right there, segueing into a bit about whether Mrs Krabappel should be dating Principal Skinner or Ned Flanders ("Twilight" for Gen-Xers, I guess).

If I got a bit creative, I could finish it with, "I" is for the idiots who fund him, and "L" is for lost family we mourn. Okay, so that is a bit of a downer ending, but in my defense, it is North Korea. 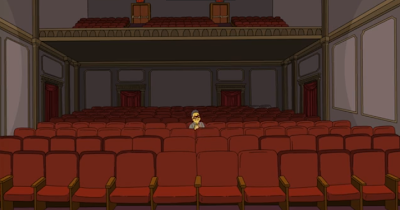 Email ThisBlogThis!Share to TwitterShare to FacebookShare to Pinterest
Labels: Kim Jong-il, The Simpsons