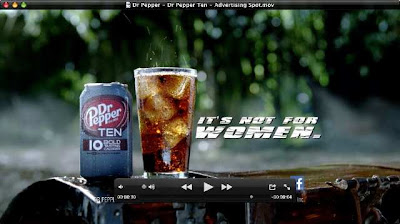 This "not for women" advertisement for a new Dr Pepper product would be a blatant example of what we call gendered advertising:


Looking for a drink worthy of a man's man? Don't cue that Dos Equis commercial just yet -- the maker of Dr Pepper is rolling out Dr Pepper Ten, a 10-calorie soda with an ad campaign that asserts that the soft drink is "not for women." ...

This isn't the first time food products have blatantly targeted men -- Pocky biscuits, popular in Japan, have a Men's Pocky edition (in blue packaging) as well.

Other diet soft drinks -- such as Coke Zero and Pepsi Max -- have been marketed toward a male audience as well, but perhaps not as aggressively as Dr Pepper Ten, according to the Associated Press. One ad involves wrestling snakes, shooting lasers and engaging in other such 'macho' activities.

"A Facebook page for the drink contains an application that allows it to exclude women from viewing content, which includes games and videos aimed at being 'manly,'" the story explains. "For instance, there's a shooting gallery where you shoot things like high heels and lipstick, for example."

It's not made clear why appealing to men includes using deadly weapons to destroy symbols associated with women.

I wonder what The Grand Narrative would have to say, since he says a lot about this phenomenon in Korean marketing.