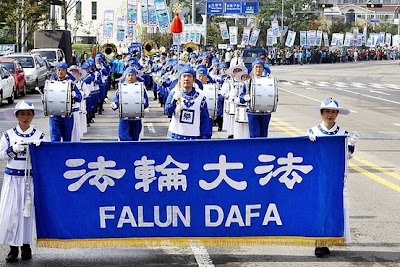 The ROK government, cowering like Gollum in the face of China, has decided to deport ten Falun Gong adherents, which has prompted protests like the one above.

I've seen their small protests in front of the Central Post Office in the Myŏngdong district of Seoul, but I never realized they had numbers like this. Nor did I realize they were all band geeks.

Anyway, my prayers go out to those who have been forcibly returned to the PRC. I'm sorta on the fence about how I feel about Falun Gong, but I think it's pretty clear they are persecuted in China and face hardships if they are compelled to return.