Obama's jobs speech: We are tougher than the times we live in 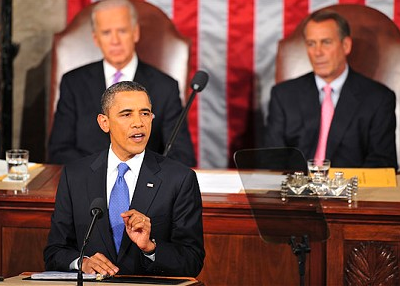 I was going to tweet some of my thoughts, but Twitter seems to be overwhelmed with people trying to do the same.

I'm watching it online at the Los Angeles Times website (which annoyingly refreshes itself every five minutes, forcing me to miss about fifteen seconds of speech). [UPDATE: The Telegraph has the transcript of the speech, which I may put snippets of in the text below.]

I'll tell you, it's essentially State of the Union 2011-1/2. A lot of good points, many of the reiterations of things he's called for in the past (e.g., taxes done in a way where everyone pays their fair share), but the highlight — and the opener — was his America Jobs Act (?) full of such things as building up infrastructure, giving tax breaks to those who hire new people, helping veterans get jobs, etc. It has a lot more in it than I'm laying out here — and he insists it will be paid for — so I'm not doing it justice. Go read up on it.

As I expected him to do, he called for quick passage of the FTA with South Korea, but also with Panama and Colombia (I wasn't so sure he'd include those two). That's a great point, but again he says that if people in America are going to drive Hyundais and Kias, he wants to see people in Korea driving Chryslers and Fords and Chevys (I hope he realizes they already drive Chevrolets!).

His regulation-reducing effort was also highlighted. We need to make sure that regulations are there to protect the health and welfare of the country. At the same time, he says, we should resist the desire to deregulate completely, getting rid of things that provide environmental protections, protections for workers. "We shouldn't be in a race to the bottom, ... but a race to the top." Dismantling protections to make the corporations stronger is not the way to go, he says.

That was, in fact, not his only nationalism-infused statement. American will be #1 again, we'll be top in the world, there's no reason we can't beat China, etc., etc.

Overall, a good and timely speech, one that emphasizes bipartisanship (he emphasized over and over how his proposed jobs bill was a litany of things supported by both Dems and Republicans) and is filled with a bunch of points that I generally agree with. Now just get on it. As you said, the people who elected "us" don't have fourteen months to wait.

Of course, with House Speaker John Boehner not applauding at things one would think Republicans would support — like how the GI Bill helped a whole lot of people go to college who otherwise couldn't have — I expect something of an uphill battle (some Republicans who weren't even going to attend dismissed the speech before it was even made, some even boycotting it).

And why not? If the Republicans want to re-take the White House next year, it's better for them if the unemployment rate remains high, and it seems that gridlock to block Obama's plans to fix the economy in order to keep it high actually is their strategy. But Boehner may have been listening to that speech and thinking, at some point, that maybe his job will be more secure and he can effect more of the changes he wants, if he remains head of the House in a second Obama administration. But that's just a thought; I can't read his mind, nor he mine.