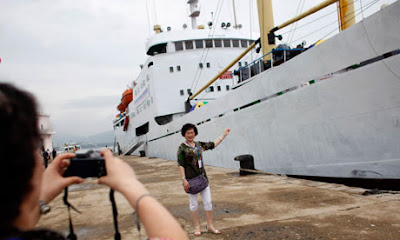 Remember The Love Boat, where each episode would bring us three couples who found romance against the backdrop of a cruise ship plying the waters off the coast of an impoverished country where violence and mayhem were a way of life?

Well, it's back! But instead of Mexico being the dysfunctionally violent and poor country off whose shores they sailed, this time it's North Korea.


On Tuesday, the mysterious state launched itself into the glitzy world of cruise tourism when about 130 passengers set sail from the rundown port of Rajin, near the China-Russia border, for the scenic Mount Kumgang resort near the South Korean border.

Isolated North Korea's "state tourism bureau" has teamed up with a Chinese travel company to run the country's first cruise aboard an ageing 9,700-tonne vessel that once plied the waters off the east coast of the divided peninsula shuttling passengers between North Korea and Japan.

The ship was later used to transport cargo before Tokyo blocked its entry as part of economic sanctions over Pyongyang's missile and nuclear tests in 2006.

Some 500 North Koreans, about half dressed in dark workers' clothes and the others in office and traditional attire, waved off the ship in a choreographed performance on the potholed dock.

The spectators waved North Koreans flags and fake flowers, and let off fireworks to mark the occasion. Carnival music blared from two minivans.

Before the launch, Hwang Chol-nam, the vice-mayor of Rason City, gave a speech lauding the venture as part of the region's push to attract tourism.

Any nationality can visit the area visa-free. They must, however, arrange the trip through designated tour companies.

"Any country, people from America, Japanese, Singaporean, can come to Rason, that's the reality today, and that's the same for the Kumgang special economic zone," he told reporters aboard the vessel. ...

The cruise, which sails the length of North Korea's picturesque eastern coastline, will appeal not only to the adventurous seeking "something different", but also to gamblers wanting to try their luck at the North's casinos in Rason and Kumgang.

This brings up the whole issue of propping up the Pyongyang regime, of course, but I'm guessing some people just don't care or think it's merely a drop in the bucket.

I do take issue with The Guardian's description of Rajin as a rundown port. The Chinese are reportedly pouring a good deal of money into building the area up. I suppose the part off limits to North Korean civilians, however, might still be a bit dilapidated, but the region is enjoying a bit of a Rajin renaissance as China starts looking in that direction for an outlet to the sea that would justify propping up the DPRK.

In fact, one could call this a new Age of Rasŏn. Thanks, I'm here all week. 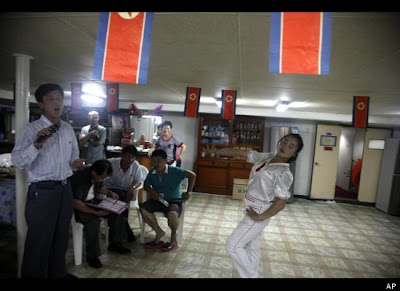 UPDATED:
The Huffington Post has pictures of the cruise and the cruise ship. It ain't no Carnival Cruise, that's for sure.