When I'm away from Orange County for months at a time (previously in Seoul and lately in Honolulu), my mom would call me up and chat just to make sure I was all right and somewhat closer to getting married and producing grandchildren for her. On rare occasion when I was away for more than six months, I'd make sure to email her while I was in faraway lands like Hong Kong, Italy, or Japan.

Today's OCCSD has made me second guess that tack, for my own safety. Here we have a guy who is being accused of killing his business partner and then obscuring that fact by faking, through a series of emails, a situation where the murder victim was not in contact with his family because he'd gone to Africa for the vacation of a lifetime.


Last summer, Christopher Ryan Smith emailed family and friends with exciting news: He was embarking on an African adventure.

Over the next few months, his emails recounted the highlights. One day he was paragliding near Johannesburg. On another, he was sand boarding in "huge mines" in South Africa where the "sand was softer than snow powder."

In December, the 32-year-old Internet executive from Laguna Beach announced that he was going to Congo and Rwanda. Then, abruptly, all communication stopped.

His worried family in Oregon called U.S. authorities and launched an international hunt, fearing he might have run into trouble in the war-torn region.

But Orange County authorities now say Smith was never in Africa; in fact, he was already dead. They say he was killed inside his office in San Juan Capistrano by his business partner, Edward Younghoon Shin, who used Smith's email account to send the messages.

The thing is, I think I briefly met this Edward guy some years ago, maybe in Irvine. He's not the Edward of the K-blogosphere, though. 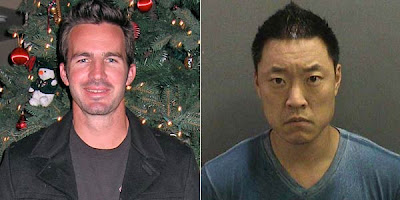 Email ThisBlogThis!Share to TwitterShare to FacebookShare to Pinterest
Labels: Edward Younghoon Shin, Orange County crime story of the day, some kyopo are evil