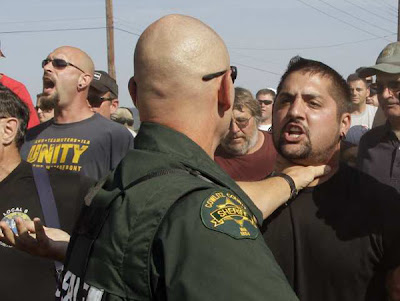 This kind of organized union violence and property damage — orchestrated in part online — is something you would expect to read about a Korean shipbuilding plant, not a port in Washington State:


Hundreds of angry longshoremen stormed through a grain shipping terminal in Longview, Wash., early Thursday and held security guards at bay while descending on a disputed train full of grain, cutting brake lines and dumping cargo.

The predawn labor protests came after a clash with police Wednesday in which hundreds of longshoremen blocked railroad tracks near Vancouver, Wash., to prevent grain cargo from reaching an export terminal 45 miles farther west. In that protest, they far outnumbered officers, pelting police with rocks and spraying them with pepper spray, police said.

There have been no serious injuries, but 19 protesters were arrested on charges of trespassing during the initial protests Wednesday.

Police were not present during Thursday's predawn action at the terminal, but they said six security guards were held inside a guard shack while protesters attacked the train, broke windows in the shack and pushed a private security vehicle into a ditch.

"Yesterday there were probably 300 or 400 of them. Today there was even more, and we were just outnumbered," Longview Police Chief Jim Duscha said in an interview.

"At this point, we hear there are longshoremen coming down from the Seattle-Tacoma area to assist. When the longshoremen were leaving, they were saying they would be back, this was not over," he said.

The call for mobilization hit the International Longshore and Warehouse Union's Facebook page Thursday morning: "Call out the troops, we're going on a road trip!" one union member wrote.

Hey, longshoremen's union, thanks for giving the anti-union Tea Party types ammo in the ideology wars about collective bargaining and labor movements.