Picture of the day: Who's who at the North Korea anniversary party

I clicked on this link which the Washington Post had described thus:


North Korean leader Kim Jong Il and his son watched a massive military parade in Pyongyang on Friday, to mark the 63rd anniversary of the country's founding.

One would expect from such a caption that those two — and perhaps only those two — watching the parade way up their on the dais, were positioned in a way that it was truly a sign that the Young General had taken his place of honor at the Right Hand as the Rightful Heir of the Dear Leader.

Yet we see, yet again, that The Kim Who Wasn't There™ doesn't even get to stand next to his dad. Nope, the Ascension of Kim Jong-un is by no means a done deal, even if the WaPo and the Associated are hanging on that prospect. For now, the would-be Radiant Leader is merely the Dreary Wallflower.

Perhaps I need to go do a KCNA check once again and see if Kim Jong-un is still mentioned so little that he is essentially off the radar. 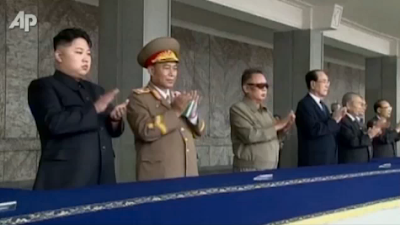