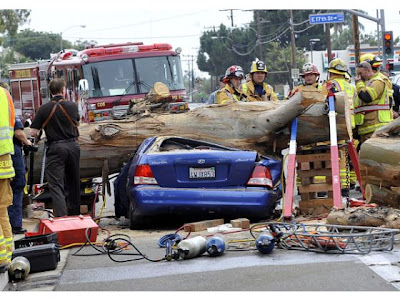 Oh, God, what a horrible tragedy. This woman was driving her Hyundai Accent in Costa Mesa, a central Orange County community near Irvine and Santa Ana, and a large eucalyptus tree fell on her. The Washington Post has the AP story here, and the Orange County Register has the story here, which still carries a title saying the victim was "injured."


One person was killed when a tree slammed into a car Thursday afternoon, authorities said.

Police received initial reports of a vehicle crashing into a tree, but when officers arrived at the scene, it wasn’t immediately clear how the driver was injured, Costa Mesa police Lt. Mark Manley said.

“It may have been a tree just fell onto the car,” Manley said.

Rescuers responded to the intersection of Irvine Avenue and 17th Street about 2 p.m.

Commenters at the OCR site are criticizing that paper's coverage (as they often do) for only getting half the story. They point to stories in the Los Angeles Times, and at KABC, the local ABC affiliate.

The latter has a witness saying that the firefighters tried to rescue the woman by lifting the tree but dropped it onto the car a second time, possibly killing her:


A witness said that the woman was alive and talking to other witnesses at the scene while in the car under the tree.

"They were talking to her, communicating with her, she was still talking back about everything," she said. "She was okay, she was alive and breathing."

But she said when firefighters tried to lift the tree off the vehicle, it dropped for a second time.

"When they went to lift it, it might have been too heavy, and it just dropped back down and crushed the car even more," she said. "It got more smaller, it was just terrible."

The witness was unsure if the driver was still alive when the tree dropped back down.

Just horrible. People buying cars often check how well they do in head-on, side, and rear-end collisions, and Hyundai vehicles seem to do well in that area, but there seems not much one can do to protect against a massive tree falling on your vehicle.

Initial reports didn't identify the deceased driver, but it was later reported that the car is registered to a woman named Haeyoon Miller. Whoever the victim is, thoughts and prayers go out to her and her family.

That large trees grow up near roadways and sidewalks relatively untended brings occasional tragedy like this. Back in Seoul, I know a lot of people mock the way trees over roadways are denuded practically every year, but my understanding is that this keeps their size under control and prevents them from getting too big to stay healthy and reliably upright. If that is true (and I'm not expert on tree maintenance, so I really don't know), such seemingly drastic measures make sense, and perhaps avert disaster (though Korea's abysmal driving conditions cause traffic deaths the good old-fashioned way). 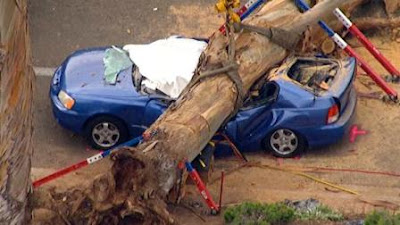