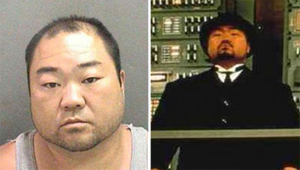 A kyopo from Orange County who has played bit roles in various movies, including a stint as a henchman in Austin Powers, has gotten life in prison for a kidnap and rape over two decades ago.


To millions of moviegoers he was Doctor Evil's henchman Random Task.

But now a 40-year-old Orange County actor famous from an "Austin Powers" movie will be spending life in state prison in connection with a 1990 Christmas Eve gang rape and torture of a woman taking a walk to see the seasonal lights.

Joseph Hyungmin Son was found guilty Aug. 25 of felony torture, an offense that carries a life term without possibility of parole. The actor was originally charged three years ago with numerous sex crimes but because of a statute of limitations, prosecutors eventually won a conviction on torture.

According to prosecutors, a woman walking back to her apartment alone with her dog after going to look at Christmas lights with a relative and friend was stopped by Son about 12:30 a.m. on Christmas Eve 1990. Son asked her for directions and then with another man dragged her to their car, threw her in the back and drove away.

Son and the other man told her they were driving to Compton, pistol-whipped her and repeatedly threatened to kill her. Prosecutors said Son then repeatedly raped, sodomized and forced the victim to orally copulate him in the back of the car. He also tortured her with a firearm. Son's cohort Santiago Lopez Gaitan, 40, of San Antonio raped the woman.

Afterward, Son threatened to kill the victim and counted the bullets in the gun out loud as she pleaded for her life. Son and Gaitan finally allowed the woman, identified only as Jane Doe, to leave, naked and with her pants tied around her eyes. The victim was actually in Huntington Beach and went to a nearby home where homeowners called the police.

While physical evidence was gathered in the case from the sexual assault, the case went cold. Son, however, was convicted in May 2008 of felony vandalism in an unrelated case and was forced to give a DNA sample. That sample was then linked to DNA collected in the 1990 case, prosecutors said.

I guess playing an evil sidekick wasn't much of a stretch for him. Good riddance.

UPDATE (October 2011):
Mr Son may have killed his own cellmate in prison.

Email ThisBlogThis!Share to TwitterShare to FacebookShare to Pinterest
Labels: Orange County crime story of the day, some kyopo are evil