And they "may do something crazy"! So said the US ambassador to Japan, in 2006.

From the Wikileaks site itself:

¶1. (S) At 11:00 a.m. on April 20, the Ambassador spoke
with VFM Yachi, at Yachi's request, regarding simmering
tensions between Japan and the ROK over a planned Japanese
maritime survey near the disputed Liancourt Rocks (reftel).
He explained, briefly, that the ROK intended to propose to an
international commission in June that features on the bottom
of the sea in the disputed area be given Korean names. Japan
wants to survey the area in order to make a counter-proposal
at the meeting. Korea, Yachi stated, may use force to block
the survey ship. Yachi further noted that he might travel to
Seoul the following day, April 21, to try to resolve the
matter peacefully.

¶2. (S) The Ambassador stated the United States understands
that Japan is within its rights under international law. The
Koreans are behaving irrationally, and the United States is
concerned that they may do something crazy, causing a major
problem. Everyone needs to back off, he stressed, to enable
the matter to be resolved peacefully. We do not want our two
allies shooting at each other, he asserted. The Ambassador
advised that he might get in touch with FM Aso later in the
day.

¶3. (C) Yachi thanked the Ambassador for his concern and
said he would do his best. He requested that the Ambassador
send an Embassy representative to the Foreign Ministry to
hear Japan's position on the issue.
SCHIEFFER

I would have liked to have been a fly on the wall during that conversation. While I think that South Korea in 2005 and 2006 did collectively need to just chill despite noise made by Tokyo over the islets long claimed by Korea and firmly in South Korea's hands for over half a century, I think Japan was out of line for trying to conduct such a survey in what are essentially territorial waters of the Republic of Korea or the EEZ that they generate. South Korea had no choice but to react with a show of force. 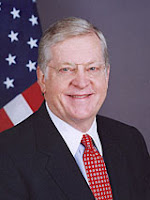 Korea is not "crazy" or "irrational" for being adamantly opposed to the Japanese attempt, and it's most unfortunate that the then-newbie US ambassador to Japan would editorialize as much. I seriously doubt the good Ambassador John Schieffer to Japan had any more direct knowledge or informed clue of what the South Korean side might do than anyone reading K-blogs back in 2005 and 2006.

I note that, five years later, no such "crazy" thing has happened from the Seoul side to bear that out.