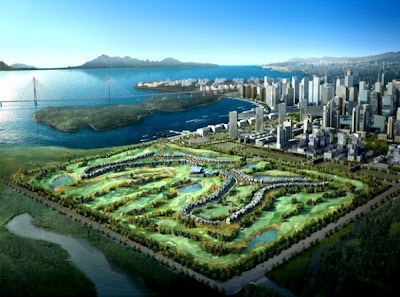 South Korea made the New York Times list of "The Forty-five Places To Go in 2012." Not a single place, but the entire country, or at least the golf courses:


South Korea is redefining just how luxurious golf resorts can be. A slew of new private clubs — the kind with six-digit membership fees, designs by celebrity architects and clubhouses that look like modern art museums — have opened recently in the country.

The most prestigious is Haesley Nine Bridges, just outside Seoul, with a clubhouse covered by a huge, sinuous web of wooden beams (it also features one of Jeff Koons’s giant balloon toy sculptures).

Then there’s the Ananti Club, also a commuter’s distance from Seoul: 486 acres containing three courses nestled in the Yumyŏngsan forest, with a clubhouse, designed by the architect Ken Min, built almost entirely underground. And the futuristic Jack Nicklaus Golf Club Korea, which opened last year in the financial center of Songdo, has a huge, undulating clubhouse designed by the California architect Mehrdad Yazdani.

In 2015, South Korea will be the host of the Presidents Cup for the first time; apparently there are some tournament-worthy courses to go with all those fancy new clubhouses.

Go and read about the other forty-four, which include the Florence's art scene, luxury accommodations in Antarctica, and the nation of Panama, flush with investors, retirees, and visitors in the wake of the same wave of free-trade frenzy that brought us the KORUS FTA. 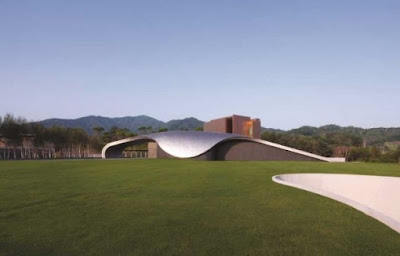