Death to US Imperialist Wolves and Happy Hanukkah

30 Rock is back. And while its season premiere, occurring in January to accommodate Tina Fey's pregnancy, was not the most gut-wrenchingly hilarious episode ever, it did have some laugh-out-loud moments that had me frightening the cat.

But why am I talking about it here, on this blog dedicated to ROK-related news, Korean cultural issues, and gripes about what kinetic balls of narcissism my nephews and nieces are? There is indeed a Korean connection: You may recall last spring that the season finale had comedienne Margaret Cho, a favorite among the gay for her gender ambiguity, playing Kim Jong-il. 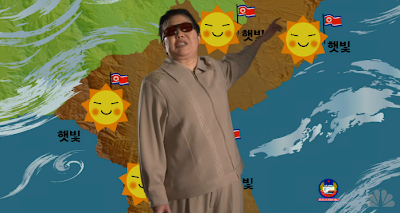 When we left things off, the Dear Leader had just kidnapped the wife of Jack Donaghy (played by Words With Friends aficionado Alec Baldwin). Well, it seems that Margaret Cho has lost what could have been a  lucrative gig when the Dear Leader joined the Great Gulag and Re-Education Camp in the sky ground.

I feel ya, Margaret Cho (in the figurative, empathetic sense only). Kim Jong-il's death has cost me several hundred dollars as well, in the form of a weaker South Korean currency. This was the natural result of fears of political instability on the Korean Peninsula, worries about rogue nukes going a missin', a sudden dearth of jokes on late night television, and the permanent shelving of plans for a sequel to Team America: World Police.

(Indeed, the KRW is a very sensitive currency, which tends to fall precipitously whenever there is bad news in South Korea, Northeast Asia, Southeast Asia, South Africa, South Central Los Angeles, or either of the Dakotas. I've already sold short in anticipation of whatever will happen during the South Carolina primary. And no, I'm not exaggerating. We have recently seen the Korean won plunge on a daily basis due to the Euro-zone not getting its act together, the Moody Blues' credit downgrade of the United States, and either Nicolas Sarkozy or Silvio Berlusconi getting an erection lasting for more than four hours. Joe Biden sneezing would cost me at least fifty bucks right now.) 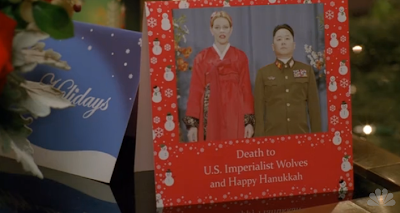 Um, anyway, in lieu of Kim Jong-il, the writers brought in Kim Jong-un, a man-child whose name is apparently even harder to pronounce than his father's. I have not yet finished watching the episode, however, so all I can do is say, "Hmm, this would be a good time to mention any one of my posts on famous non-Koreans wearing hanbok" (the latter is a lot funnier if you're as drunk as I was when I wrote it).

UPDATE:
I finally watched the entire episode and, as I suspected, the brief mention of the Ling-and-Lee-esque detainment of Jack Donaghy's wife in North Korea did not go beyond the above sight gag. I'm guessing they plan to make her "rescue" a bigger focus later, and thus will drag this out a bit while Rachel McAdams Elizabeth Banks (who plays Mrs Donaghy) finishes up a few projects.