The Los Angeles Times mentions a discussion Mitt Romney has had with a TV anchor for Univision, the Spanish-language television network that is ripping our social fabric to shreds is the largest Spanish-langauge network in los Estados Unidos. 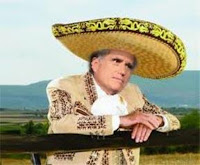 Apparently the suggestion was made that because his father was born in Mexico, that might make Mitt Romney the first Mexican-American to win the White House.


George Romney -- auto company president, Michigan governor and 1968 Republican presidential aspirant -- was, in fact, born in Mexico, where his parents lived in a Mormon community.

Jorge Ramos, a Univision TV anchor, asked if that could allow his son to claim that he’s of Mexican American descent and possibly become the first Hispanic president.

Romney, who doesn’t speak Spanish, indicated that he’d be very pleased if that idea got spread around ahead of Tuesday’s primary in Florida. About one-tenth of the Republican vote is expected to be cast by Latinos, mainly Cuban Americans, Puerto Ricans and a smattering of immigrants from Central and South America.

“I would love to be able to convince people of that, particularly in a Florida primary,” Romney said, with a chuckle, during the interview in Miami, a Cuban American stronghold.

“But I think that might be disingenuous on my part,” he added.

If all this were true, that would make him part of the Juan Percent. [rim shot]

Others might say he's definitely a Mexican't, and a bit of a Felipe-flopper.

(The title is from a Duran Duran song, circa the Pleistocene Era)