Korea and Japan as brothers?

Real life has been kicking my arse lately, so I haven't been able to keep up with things I enjoy, like blogging, moviegoing, or visits to the beach. 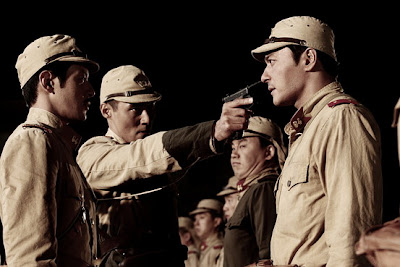 One movie I've been keen to see is My Way, by the same director who brought us Taegukki (aka Brotherhood). That film was about two brothers who end up drafted in the Korean War and sent to the front lines. It is a grueling account of how families were thrown into turmoil during that fratricidal conflict.


My Way, which takes place in World War II, is not about biological brothers, but instead focuses on two "countrymen," one from Japan and the other from Korea, then part of Imperial Japan. Like director Kang Jekyu, I feel Korea and Japan could be and should be closer allies than they are, but historic issues get in the way. 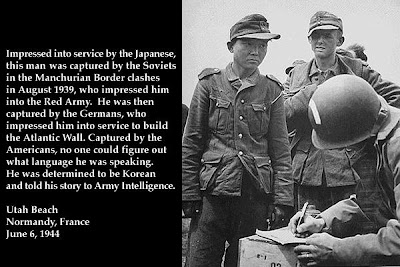 The kernel of the movie, which I am hoping to see when/if it makes its way to Honolulu (I missed it in California this past vacation), is the story of a few Korean soldiers in German uniform who were captured at Normandy. They'd been Japanese Imperial soldiers, captured by the Russians who forced them to fight, then captured by the Germans who did the same. Finally, they were captured by the Americans who didn't know what nationality they were (a long American tradition involving Koreans).

I'd first read about it here, when that site was linked to The Marmot's Hole in a post I cannot find (maybe this one?), and I remember thinking to myself, "Gee, they really ought to make a movie about this story."

Fastforward some three years later, and that's what we've got. But instead of making the Japanese into the villains, it seems Mr Kang has decided to take a different look at the war: From the Wall Street Journal:


It builds on the brotherhood theme that made his last movie, the 2004 epic on the Korean War called “Taegukgi,” one of the biggest hits in Korean cinema history. “Taegukgi” was about two brothers who fought on opposite sides of the Korean War. In “My Way,” the Korean soldier’s odyssey from Japan to the Soviet Union to Germany to France is matched by a Japanese man who was the Korean’s rival in long-distance running. Instead of blood ties, they are bound by shared experience and historic ties that loom larger for them the farther they get from home.

Mr Kang expands further on what he hopes to accomplish with the film, vis-à-vis Korea-Japan relations, at least at the social level:


I think Japan is the closest country to Korea. When the movie “Shiri” was released in Japan, it met with a favorable response from Japanese audiences, so I felt more familiar and close to Japan. But I feel sorry that Korea and Japan have a different perspective on some issues such as comfort women, Dokdo Island and the portrayal of Korea in Japanese textbooks. I thought if such situations keep going, the two countries will remain as far apart as ever. So I’ve wanted South Korea and Japan to have some opportunities to get closer and understand each other, and hoped to contribute it by making a movie. While my movies so far have talked about inter-Korean issues, I wanted to provide opportunities for Asian countries to understand each other more.

Hear! Hear! In a region of long memories and short tempers, it's hard to build bridges and start anew, but it's never going to happen if no one tries.

Email ThisBlogThis!Share to TwitterShare to FacebookShare to Pinterest
Labels: Korean War, looking back on Imperial Japan, My Way, Shiri, Taegukki