Huntsman has left the building 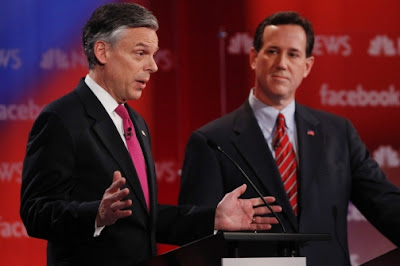 I am terribly disappointed by this. Governor Huntsman was by far my favorite, even if I don't agree with all his views. First of all, he did actually attempt health care reform, which is a far cry from the rest of the field, who just whine about Obamacare without acknowledging that their party has done nothing real to deal with this issue after killing Hillarycare back in the mid-1990s. (Former Massachusetts governor Mitt Romney is an exception to this, of course, but in order to appeal to the far right, he's running on a platform of killing the same Obamacare that is modeled after his own Romneycare.)

Governor Huntsman also has shown not only that he can work with the other side (he was President Obama's ambassador to China) but also that he sees tremendous value in doing so. His quick response to Mitt Romney's absurd criticism of Huntsman for working with Obama was laudatory and downright inspiring: Romney's attitude of party over country is precisely what is wrong with this country (he says as much at about 1:20 or 1:30 in the above video).

In case you missed what I'm talking about, here's a post-debate piece from just before the New Hampshire primary:


Huntsman: “I was criticized last night by Governor Romney for putting my country first … He criticized me while he was out raising money for serving my country in China. Yes, under a Democrat. Like my two sons are doing in the United States Navy. They're not asking what political affiliation the president is. I want to be very clear with the people here in New Hampshire and this country: I will always put my country first.”

Here was Romney’s response: “I think we serve our country first by standing for people who believe in conservative principles and doing everything in our power to promote an agenda that does not include President Obama's agenda.”

Huntsman’s invocation of his two sons serving in the military is an essential reminder of a bedrock American tradition: our servicemen and women do not make their service contingent on the political persuasion of the president. That’s because they are patriots first, not partisans. Huntsman deserved the applause he received for that line.

Romney’s response seems to me at least as remarkable: “I think we serve our country first by standing for people who believe in conservative principles …” That is the opposite of John McCain’s 2008 campaign slogan, “Country First.” Romney’s answer is “Party First,” “Ideology First.”

But the right wing that has a chokehold on the Republican Party today has been fed so much red meat that they see that as weak, socialist, and un-American, among other things.

Like I said, I don't agree with everything Huntsman stands for, but neither do I feel the same about Obama. But with the exit of Huntsman, we're down to few or no candidates who I would feel comfortable with as president for the next four to eight years. In fact, the most disappointing thing about this is that Huntsman turned around and endorsed Romney, whose flip-flopping and running away from the best part of his record in order to pander to the right makes him a lousy choice for president.

The only good I can see from that move is the possibility that he might be picked as a running mate for Romney, but with the Religious Right being so concerned about Romney's Mormonism, I don't see Mitt doubling down on what is a major source of concern among many conservative voters.

This is terribly disappointing. He was by far my favorite, in part because (a) he actually attempted health care reform in his state and (b) he saw the value in going across the aisle to make things work.

Right now, if I were to have to choose someone to vote for, I guess I'd pick Newt Gingrich, mainly because he has shown, during the Clinton years, that he is able to hammer out important deals with the Democrats that get the country back on track. Pragmatism and country before ideology, at least on the budget deficit and the national debt (not so much on health care).

Frankly, though, Huntsman was the last truly electable candidate running. Mitt Romney faces an uphill battle with his own party because of his past support for universal health care, his Mormonism, and lately his history of laying off people. Gingrich faces an uphill battle with non-conservatives due to his abrasiveness and his history of infidelity (hypocritical infidelity, no less). Ron Paul has some great ideas but is a simplistic kook on others. Though he demonstrates flexibility over ideology, Rick Santorum holds tight to homophobic views that are at odds with independent and Democratic voters, while his own record of political advantage-making will likely come back to haunt him in the general election.

Well, there's still Gary Johnson, a former governor of New Mexico who was wildly popular with Republicans and Democrats with viable positions on a number of issues. Inexplicably and inexcusably, Governor Johnson has been excluded from all the Republican debates, as if he is not a serious candidate and as if he is not even running. In all seriousness, this is an absolute travesty of our democratic system. Perhaps he wasn't invited because he stands for drug legalization and believes same-sex marriage should be allowed, but is this all that different from Ron Paul?

If you find yourself flirting with some of Ron Paul's more sensible ideas but you're turned off by his wackiness on others, go check out Gary Johnson. With Huntsman gone, he's my next favorite candidate.