SoKo in the SOTU 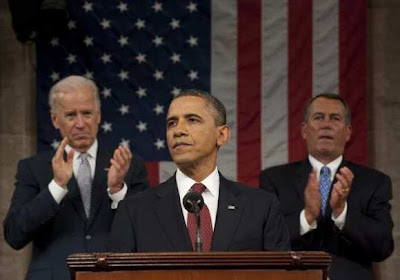 With the passage of the Korea-US free trade agreement (aka KORUS FTA) being one of President Obama's key accomplishments in 2011, a year marked by contentious relations with an obstructionist Congress, it's no wonder he decided to highlight it in Tuesday night's State of the Union address:


My message is simple. It’s time to stop rewarding businesses that ship jobs overseas, and start rewarding companies that create jobs right here in America. Send me these tax reforms, and I’ll sign them right away.

We’re also making it easier for American businesses to sell products all over the world. Two years ago, I set a goal of doubling U.S. exports over five years. With the bipartisan trade agreements I signed into law, we are on track to meet that goal – ahead of schedule. Soon, there will be millions of new customers for American goods in Panama, Colombia, and South Korea. Soon, there will be new cars on the streets of Seoul imported from Detroit, and Toledo, and Chicago.

I will go anywhere in the world to open new markets for American products.

Putting Fords, Chryslers, and Chevys on Korean roads is a frequent theme of Obama's speeches, although everyone should realize by now that General Motors, in the form of GM Daewoo, is the third largest automobile company in South Korea, and it now comes with a Chevrolet nameplate.

But the very next thing in the address is a warning to unfair trading "partners":


And I will not stand by when our competitors don’t play by the rules. We’ve brought trade cases against China at nearly twice the rate as the last administration – and it’s made a difference. Over a thousand Americans are working today because we stopped a surge in Chinese tires. But we need to do more. It’s not right when another country lets our movies, music, and software be pirated. It’s not fair when foreign manufacturers have a leg up on ours only because they’re heavily subsidized.

Tonight, I’m announcing the creation of a Trade Enforcement Unit that will be charged with investigating unfair trade practices in countries like China. There will be more inspections to prevent counterfeit or unsafe goods from crossing our borders. And this Congress should make sure that no foreign company has an advantage over American manufacturing when it comes to accessing finance or new markets like Russia. Our workers are the most productive on Earth, and if the playing field is level, I promise you – America will always win.

When so much of the rhetoric about the KORUS FTA revolved around supposedly unfair advantages that Korean car companies had over their American counterparts, I'm not too happy about the juxtaposition of trade with Korea and trade with China.

But that's me. I suspect that the same people who aren't sure which Korea is the good one might also think Korea is a city in China.

Indirectly, there were other mentions of Korea, particularly in reference to military affairs:


The renewal of American leadership can be felt across the globe. Our oldest alliances in Europe and Asia are stronger than ever. Our ties to the Americas are deeper. Our iron-clad commitment to Israel’s security has meant the closest military cooperation between our two countries in history. We’ve made it clear that America is a Pacific power, and a new beginning in Burma has lit a new hope. From the coalitions we’ve built to secure nuclear materials, to the missions we’ve led against hunger and disease; from the blows we’ve dealt to our enemies; to the enduring power of our moral example, America is back.

Anyone who tells you otherwise, anyone who tells you that America is in decline or that our influence has waned, doesn’t know what they’re talking about. That’s not the message we get from leaders around the world, all of whom are eager to work with us. That’s not how people feel from Tokyo to Berlin; from Cape Town to Rio; where opinions of America are higher than they’ve been in years. Yes, the world is changing; no, we can’t control every event. But America remains the one indispensable nation in world affairs – and as long as I’m President, I intend to keep it that way.

I'll admit I've only read parts of the speech so far, but I plan to listen to it sometime in the next couple days. It seems to have been well received, even if much of it is unrealistic given the vehement opposition he faces in the House of Representatives.

I didn't vote for Obama, but I do like the guy a lot more than I do any of the GOP candidates left in the race, and I think Obama deserves more credit than he gets. We are in a much better place than we would be otherwise, he's gotten some very important things done, and I think he has the vision, the smarts, the people, and the drive to keep moving us forward.

Tea Partiers mockingly call him "The One," but he is, right now, the one I want.