Is this becoming a thing?

First we have "Ching" and "Chong" at Chick-Fil-A, and now we have a Papa John's employee referring to her customer — where it shows up on the receipt — as "lady chinky eyes." 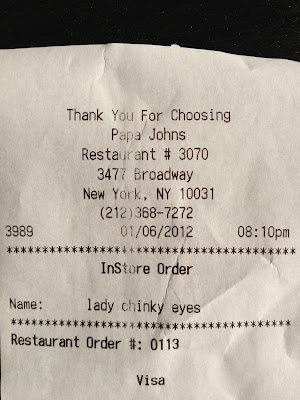 
"I didn't think [the cashier] was trying to offend the lady in any type of way, but she did. It wasn't meant to harm her in any way. But I apologize on behalf of my staff for that."

Geez, that Minhee Cho is pretty thin-skinned to be offended by that. (You can't see my eyes rolling, but they are.)

To be honest, though, I'm starting to be a little surprised this kind of thing doesn't happen more often, since apparently a lot of food service companies are employing bored, minimally paid, and barely literate teenagers to fill in descriptions and/or names of customers who come into their stores. Add to that litany of adjectives "compromised when it comes to notions about what is acceptable to say in public regarding race, ethnicity, and gender issues."

Yes, I blame rap music and hip-hop and shock culture and all that stuff, where calling people bitches or the N-word is promoted and raised up as normal and acceptable, and where racial or ethnic humor is no longer frowned up but is considered edgy and cool.

That girl who wrote that should lose her job, but perhaps a learning lesson could be snatched from this. A beer summit, but with pizza and no president. People have got to re-learn this stuff of basic decency which somehow inexplicably the American culture seems to have unlearned.

That's right, my 2012 new year's resolution was to turn into an old coot ranting about kids today (except that it's not just kids... it's people the same age as this Gen Xer, as well as our parents).

I've also resolved to lose three or four kilograms and get rock-hard abs, but that's a post for another time.