UPDATED: Beaten black and blue by the Pinkberry founder 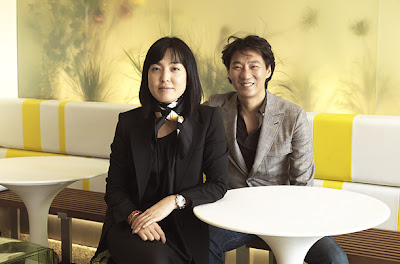 Yeah, I've had a bit of fun in the past with the name "pinkberry" and that of its Korea-based rival "Red Mango." But this is serious, if it sounds the way the LAPD is making it sound.

It seems that Young Lee (I know three people with that name), one of the co-founders of the addictive Crackberry Pinkberry yogurt chain along with fellow kyopo entrepreneur Shelly Hwang, has been arrested for "beating down" a homeless man who'd approached him in his car asking for money. According to the LAPD, Lee and a passenger in his car attacked the homeless man with a tire iron. Yikes.

The incident occurred over half a year ago but Mr Lee was arrested only this past weekend when he was at LAX:


The incident took place in June 2011 on an off-ramp of the Hollywood Freeway at Vermont Avenue, according to the Los Angeles Police Department. Young Lee was stopped at a light when he was approached by a transient seeking money, police said.

Words were exchanged, and Lee and another man in the car chased the homeless man and "beat him down" with the tire iron, police Capt. Paul Vernon said.

"This case is emblematic of how the homeless are among the most vulnerable in our society." said Vernon, commanding officer of the Central Detective Division.The extent of the homeless man's injuries hasn't been disclosed.

Detectives spent several months probing the case against Lee, who was in South Korea for part of that time.

Lee, 47, was taken into custody at Los Angeles International Airport on Monday night by the LAX Fugitive Task Force, which includes LAPD officers and FBI agents. He was booked at the LAPD's Pacific Division station, according to online Sheriff's Department booking records. Bail was set at $60,000 but the records do not indicate whether Lee was released.

Nobody deserves to be beaten down with a tire iron, and it seems to me a big chunk of the story is missing. Was Mr Lee intoxicated? Does he have arrests for other acts of violence or is this a one-off? (It seems out of character for a yogurt-monger but maybe not for a former kickboxer.)

On the other hand, despite the LAPD's statement that homeless are "among the most vulnerable," some of them can also be among the most aggressive. Here in Honolulu and back in Orange County, the homeless are a widely passive and non-menacing lot, but I've had my property or person threatened by homeless individuals in Los Angeles and San Francisco (e.g., most commonly, being told that if I give a nearby homeless person the money he's asking, he'll be sure to watch my rental car and be sure it remains safe, but if I don't pay and he doesn't watch it, who knows what terrible things might happen to it). And back in Seoul we've had occasional incidents of mentally ill homeless people killing subway commuters by pushing them into oncoming trains.

I don't mean this as a rant on the homeless, but the "most vulnerable" label is only half the story and I wonder if, as happened to me, the homeless man who approached Mr Lee's car did something threatening. Maybe, maybe not. I'm a bit incredulous that Mr Lee snapped for no good reason and a homeless man just happened to be there to receive his wrath.

Normally I wouldn't go this far with something that is pure speculation and ponderation, and I'm loath to "blame the victim," who might very well be nothing but a victim in this case, but when the LAPD offers an individual case as "emblematic" of something, that suggests they wish to make it a symbol and a cause célèbre, and I'd like to know if that's warranted.

Lee's publicized arrest is coming on the heels of a veritable serial killer recently being on the loose in neighboring Orange County, a murderer who'd been targeting homeless people and violently stabbing them to death. So far four people living on the street have lost their lives, and although a suspect has been caught, the situation has brought attention to their plight and vulnerability. The beating death of Kelly Thomas by police in the northern OC community of Fullerton last summer (and the subsequent cover-up) has also shone a light on the situation.

UPDATE:
The Los Angeles Times is finally coming out with a bit more of the story, although it doesn't absolve Mr Lee of his violent reaction. He claims words were exchanged with the homeless man who was sporting a sexually offensive tattoo:


A founder of the Pinkberry yogurt chain allegedly beat up a homeless man with a tire iron because he found the transient's sexually explicit tattoo offensive, according to L.A. prosecutors. ...

Words were exchanged, and Lee and another man in the car chased the homeless man and "beat him down" with the tire iron, police Capt. Paul Vernon said.

According to a statement by the district attorney's office, Lee felt disrespected by the tattoo. Officials did not provide a detailed description of the tattoo.

Well, now I'm really curious. There is such a thing as "fighting words," and I wonder if there was any element to that in this mystery marking.

UPDATE 2:
The LAT has its third story today about the assault. Through his attorney, Mr Lee is saying that he felt "threatened" and "at risk." And it looks like Mr Lee's attorney is echoing some of the comments I made above:


"It's inappropriate for the LAPD and D.A. to make their arguments in the press," said Lee's criminal defense attorney, Philip Kent Cohen. "As the evidence comes out, the reality will be much different than has been presented."

Cohen said there were a total of six people in Lee's car. The victim "made explicit threats as if he had a weapon," Cohen said.

"All of the people in the car felt at risk and felt threatened," Cohen said. "All of this will be flushed out in court."

Cohen said that his client has cooperated with LAPD detectives from the beginning. The lawyer said Lee contacted investigators as soon as he found out that they had visited his Malibu home and issued a warrant for his arrest.

This is looking less clearcut than first presented by the LAPD. The Los Angeles Times was a bit sloppy and premature in how they presented this, even if it turns out that Mr Lee was completely in the wrong, which I now have doubts about.